Man Arrested With 114 Bags on Weed in Ogun State (Photo) 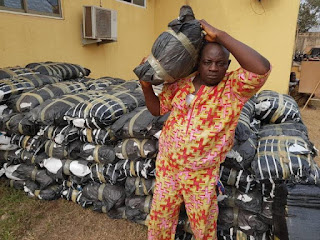 The Police in Ogun have arrested a suspected indian hemp merchant, who was reportedly caught with 114 bags of the illegal substance.

”Men of Ogun State Police Command have arrested one Noah Olaore ‘m’ with one hundred and fourteen bags of weeds suspected to be Indian Hemp,” said Mr. Oyeyemi in a statement.

He said the arrest of the suspect followed information received by officials of Federal Anti-Robbery Squad that some hoodlums who specialised in importing hard drugs from Benin Republic into Ogun State were in town.

“Upon the information, a team of FSARS operatives led by Inspr. Adeyemi Akeem were detailed to go after the hoodlums and they accosted them in front of M.K.O Abiola stadium where the suspect was arrested with the exhibits,” Mr. Oyeyemi said.

Mr. Oyeyemi said the Commissioner of Police, Ahmed Iliyasu has ordered a full scale investigation into the matter.
Posted by Unknown
Labels: Crime