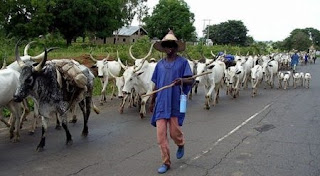 A statement credited to a member of the House of Representatives representing the Dukku/Nafada Constituency in Gombe State, Aishatu Dukku, that God created the Fulani herdsmen to value cows’ lives more than human lives has continued to generate backlash, writes JESUSEGUN ALAGBE for Punch.

Twenty-seven days after suspected Fulani herdsmen struck in five communities in the Guma and Logo local government areas of Benue State, killing 73 people, the incident has not stopped generating reaction across the country.

The New Year had barely started when the attackers struck in the villages, their action suspected to be a protest against the anti-open grazing bill passed into law by the Benue State Government in October 2017.

The administration of Governor Samuel Ortom had established the law to protect the investments of the residents, who are mainly farmers, but a faction of the Miyetti Allah Cattle Breeders Association of Nigeria, Kautal Hore, had vehemently opposed it, saying the new law would affect their means of livelihood.

In November 2017, while justifying their adoption of open grazing, the President of the Miyetti Allah Kautal Hore, Alhaji Abdullahi Bodejo, said that their cattle breed was not suitable for ranches and could not survive being confined to a particular location for a long time.

Then, Bodejo insisted that the anti-open grazing law being championed by the Benue State Government would do more harm than good to the socioeconomic life of the state if not reversed.

“It [anti-open grazing law] was also a breach of some sections of the 1999 Constitution which guarantee free movement of Nigerians. The cultural heritage of Fulani people was also violated by the law,” he had said.

“We tried ranching years before the coming of the anti-open grazing law in Benue State and it failed woefully. Our cows died a few days after. If the government is serious with the option of cattle ranching, then it beholds on them to buy-off the existing cattle from the herdsmen and replace them with a different breed of cattle, perhaps procured from abroad, that could withstand ranching.”

The National Secretary of the group, Alhassan Saleh, had also called on both the state and non-state actors to prevail on the Benue State Government to stop the “persecution” of Fulani pastoralists through the anti-open grazing law.

He had said, “Fulani pastoralists are a peaceful set of Nigerians. But that should not be taken for granted. We have used several means to appeal to the Benue State Government to reverse the law because of its implication on our socioeconomic lives, but that had failed.

“The patience of our people is running out. They are being pushed to the wall and that might force them to react someday, and their anger would be devastating. That is basically what we are trying to prevent.”

With the perpetration of the New Year killings, it was perhaps a proof of the “devastating” nature of the anger of the Kautal Hore members.

Meanwhile, there has been a narrative that a Fulani herdsman regards a cow’s life as better than a human being’s life, and while discussing the recent killings in Benue and Taraba states last Wednesday, a member of the House of Representatives representing the Dukku/Nafada Constituency in Gombe State, Aishatu Dukku, validated the narrative when she said it was God who created the Fulani herdsmen to value a cow’s life more than a human’s life.

The lawmaker had also scolded Nigerians for being “too impatient” to have conversations about issues.

“ Mr. Speaker [Yakubu Dogara], I sit here and my colleague is saying the herdsman values his cows more than the lives he is killing, but it’s not true. You can’t sit down here and just make conclusions.

“Yes, the herdsman values even the life of the cow more than his own life. That is how God has created him.”

However, criticising her colleague for saying God created the Fulani herdsman to value a cow’s life more than his own’s life, the lawmaker representing the Ado/Obadigbo/Opkokwu Constituency in Benue State, Mr. Hassan Saleh, replied, “No cow, not even 10 billion cows, has enough value like a human being. So when you say God has created them [herdsmen] in such a manner that they value their cows more than human beings, I find that very insulting and demeaning.”

Likewise, the President of the Mdzough U Tiv, Chief Edward Ujege, faulted Dukku, saying it couldn’t be true that God made Fulani herdsmen to value their cows’ lives more than human beings’ lives.

He said, “It’s a devilish statement. Human lives are far better and can never be compared to animals’ lives. God made man to be superior to other creatures and so how can someone say a cow’s life is more precious than his? But if that’s the way a Fulani man perceives himself, he should stop killing others whose lives are worth more than the cows. They should leave us alone. We want peace and security.

“The way out of this problem is to follow the constitution and the law of the land. According to the constitution, states and governors are at liberty to create laws that guarantee the safety of their people. Once the laws are enacted, everyone should obey.

But if you can’t, you can leave the state. Why the killings?”

Asked what his thoughts were on the proposed establishment of cattle colonies for herdsmen, Ujege said, “ Cattle colonies can never solve the problem we have at hand. The Fulani herdsmen can’t be going about and be colonising everywhere. They are businessmen selling their cows to the people; they are not giving them out free (of charge), so why should they be given colonies? The government knows that ranching is the solution to this crisis. This is what is practised in the developed economies. Livestock businessmen build ranches, they don’t build colonies.

“Everyone knows the game that is being played. The Fulani herdsmen have been trying to build colonies right from time and now the government is backing them. Isn’t this surprising? All the killings the herdsmen have been perpetrating, it is to take over our land and turn them into colonies.

“The government also knows this and it is unfortunate. The Federal Government is oppressing us and this is reflected in its actions. I was born in the 1940s and I know what a colony looks like. It’s like an empire. We don’t want empires again.”

A former Senator representing the Benue North-West, Joseph Waku, who told our correspondent that he recently lost a relative in an attack carried out by suspected Fulani herdsmen, also said it couldn’t be true that a cow’s life is worth more than a human’s.

“I am a mourner. They attacked my village yesterday [Monday] and killed my relative. They destroyed my farm. We value human lives more than cows and so our lives should be respected,” the bereaved elder statesman said.

The President, Campaign for Democracy, Mr. Bako Usman, regarded as “unfortunate” Dukku’s narrative that God created the Fulani herdsman to value his cow’s life more than his.

Usman also called on the security agencies to be proactive in intelligence gathering so as to stop future attacks by Fulani herdsmen.

He said, “It’s rather unfortunate that a lawmaker who is supposed to be a custodian of the law would make such a statement. That kind of statement ought not to come from a lawmaker.

“Lawmakers are to create laws that will ease the business environment for both the herdsmen and farmers to thrive and not to be making unguarded statements. Even if that is the perception of the Fulani herdsman, a lawmaker ought to correct the notion and not affirm it.

“What should be discussed right now is how to put an immediate end to the killings, not making retrogressive utterances. With the huge reaction to the New Year killings in Benue, security agencies such as the Department of State Services and the police should be more proactive and not reactive in intelligence gathering. We shouldn’t wait until people are killed before making moves.

“For instance, if a security agency is saying that a sponsored cartel was behind the Benue killings, then it should be gathering intelligence on foiling any next attack the cartel might want to carry out.”

On the proposed establishment of cattle colonies, Usman advised Fulani herdsmen, as livestock businessmen, to think of getting species that can survive in ranches and create a more conducive environment for their cattle rather than travelling around and causing attacks.

“We have plenty arable land in the country.

The Ministry of Agriculture should clear the land and establish grazing reserves for the herdsmen there. In this way, the government can also be collecting taxes from them just as it collects from other livestock businessmen,” he said.

Meanwhile, the Chairman of the Miyetti Allah in the North-East, Alhaji Mafindi Danburam, backed Dukku’s statement, saying it was true that God created a Fulani man to value a cow’s life more than a human’s life.

He said the lawmaker spoke the truth, and also described as political the killings that took place in Benue and Taraba states.

“And we have also said time and time again that our cow species can’t survive being confined in ranches. They will die. And if you kill a Fulani herdsman, expect his men to come for a reprisal. But, let me state something about the incidents in Benue and Taraba states — they were acts of criminality but political in nature.

“The government should do away with every lackadaisical attitude. The killings were political and this is because the people there are using the incidents to tell President Muhammadu Buhari never to come there for any campaign for 2019 elections. They don’t want him there, so the killings have a political undertone.

“One thing about Fulani herdsmen is that we are often regarded as second-class citizens and this is not fair. They killed over 700 people in Taraba State and slaughtered thousands of our cows sometime last year.

Nobody was ever brought to book. The perpetrators are still walking in the streets and were never arrested.”

Although some international organisations, including the United Nations High Commissioner for Refugees, said 18 people were killed in the attacks Danburam was referring to, he said it wasn’t true.

“Someone was hired in Taraba State to do the clean-up of the people killed and we know the person. They did the clean-up so that the world wouldn’t know. We have all these facts and we are not just cooking up imaginary figures. We are not for war. Let the government stop the killings and address the issues,” he said.
Posted by Unknown
Labels: News