Menu
Home » »Unlabelled » Kidnappers aressted by the Police in Kadunna 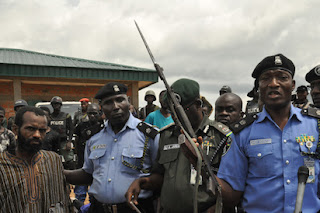 They are accused to terrorising people in the Abuja-Kaduna road in Sabon Wuse in Tafa Local Government Area of Niger. The suspects are Ibrahim Umar, who is the gang leader and others are Isiaka Mohammed, Hassan Usman, Mubarak Adamu, Yisuf Sani, Musa Usman, Yakabu Wakili, Abdullahi Abdulkarim, and others. The Force spokesman, Mr. Jimoh Moshood, told newsmen in Sabon Wise on Tuesday that items recovered from the suspects are five AK 47 rifles, nine AK 47 magazines, two cutlasses, one cell phone and 1,598 rounds of ammunition. He said that the arrest followed a coordinated operations by the Special Tactical Squad operating in the area. The spokesman said that the gang leader, Umar, confessed to have killed 10 persons during their operations. He said further that Umar also confessed that they kill and drink blood of kidnap victims who could not pay ransom. Moshood, who said that the suspects were arrested during the yuletide, said it was a huge success for the Nigeria police and Nigerians in general. He said that the suspects have all confessed to the various roles they played in the commission of the crime. “The suspects will be arraigned in court after the completion of investigation,” he said. He said that the force has evolved a new security arrangement to fight and prevent.