Menu
Home » Politics » Ijaw Youths: Nig. Govt, Stay away from our land. We say No to cattle colony

Ijaw Youths: Nig. Govt, Stay away from our land. We say No to cattle colony 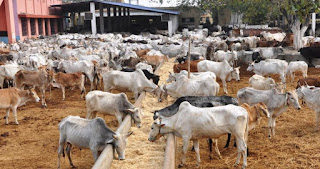 Ijaw Youth Council, IYC, says no parcel of its land will be allowed for cattle colony being promoted by the Nigerian government.

IYC in a statement by its spokesman, Henry Iyalla, said any individual or group desirous of land for herding in private business must pay for same anywhere in their domain.

Iyalla said: “It must be made clear that ranches cannot be seen as the same as colonies as stated by the Minister of Agriculture, Audu Ogbeh.

“The IYC wants to make it clear that no Ijaw land will be given to anyone to run his private business, anyone who wishes to own a ranch must buy it from the owners who are willing to sell as we will not allow anyone use disguised names to claim and colonize our lands.

“As far as the IYC is concerned, our agitations are loud and clear. What is needed as a matter of urgency is restructuring of Nigeria, a demand which is wide spread in the nation today.

“We wonder what system of government we are operating, in theory it’s a federal system, while in practice it is quasi unitary system. A system where the state governors do not have control of their security agencies is worrisome.”