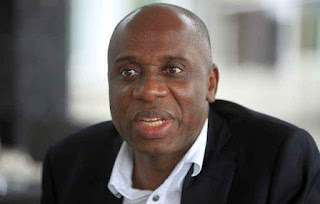 Israel Chibueze Ibeleme, a Media Aide to former Rivers State Governor and the Minister of Transportation, Chibuike Amaechi, has recounted what he went through before meeting the politician.

He told the story of how he slept, bathed in open street, had nothing to eat, while having on shirt on for over six months.

Christmas is coming. What do you want to
do in this special time of the year?

Learn more Ibeleme, who hails from Isiala-Oboro village in Ikwuano Local Government Area of Abia State, told Vanguard that he was called a madman and all sorts of names because of extreme poverty.

He said, “From 2003 and 2008, I lived in Port Harcourt without help. I became a photographer because that was the only way I could get food. I slept in the street in Rumuomoi opposite the transformer because I had been driven out of the house where I lived with a relative.

“There was a young man that sold electrical parts that always gave me cartons to sleep on whenever he closed from his shop.

“I would bath between 12 midnight and 1am because I had to do it almost in the middle of the road and that was the best time to do it as traffic would have eased.

“One particular day I told God I was not looking for mattress, pillow or even coverlet to sleep, but just a roof over my head. The first wardrobe I had to keep my things was inside the transformer beside the open space where I always slept in the street.

“I had only one pair of shoes, one pair of trousers and a T-shirt. Everyone around the community knew me with the clothes.

Sometimes I fed on N20 per day. People called me all kinds of names just because I always slept in the street. Life was miserable; people didn’t want me around them. Though I had a village I could go back to, I made up my mind I wasn’t returning there.

“I started street photography and I was making between N20 and N40 per day. To cut the long story short, there was never a time back then when I found something to eat when I needed it, but, in all of these, I was very close to God.

“I didn’t tell my family what I was going through until my troubles were over. It was a difficult moment in my life. I was known as Eze the photographer.

“People called me a mad man, a demon because I kept wearing one shirt every day sometimes for six months. I always trekked to my destination in town, no matter how far, until God used somebody one day to change my story.

“And after my story changed, I always reflect on what my life used to be and what I went through and I know that someone somewhere is going through similar experience.

“I made a vow to God that if He removed me from abject poverty, I will do everything humanly possible to help those in need and that is why I initiated Israel Ibeleme Foundation.”
Posted by Unknown
Labels: Gist