How we killed notorious kidnapper, Don Waney in Rivers- Army 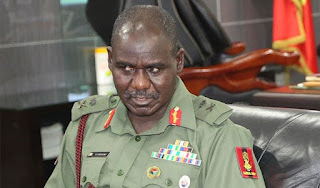 The 6 Division of the Nigerian Army, Port Harcourt on Sunday confirmed the death of a notorious cultists and kidnap kingpin, Johnson Igwedibia alias Don Waney.

The General Officer Commanding the Division, Major General Enonbong Udoh while displaying the corpses of Don Waney alongside two of his gang leaders to Journalist at the Division's Headquarters in Port Harcourt on Sunday said the deceased was tracked down at his new acquired residence in Enugu.

He said the deceased and his gangs were responsible for the new year attack in Omoku community where scores of persons were killed.

He said Don Waney's second in command, Ikechukwu Adiele who he said led the gang of killers that massacred innocent residents of Omoku on the new year were among those that were shot dead by the combine team of Army and DSS.

He said the Division in collaboration with DSS and Army had redoubled their efforts to apprehend Waney following the directive given by President Muhammadu Buhari that those responsible for Omoku killings should be apprehended.

He said the notorious bandit had reallocated to Enugu where he rented apartment and had been mixing up with the neighbourhood, saying that the deceased were tracked down with the assistance of 82 Division of the Nigerian Army.

He said when the troops invaded Waney's residence, he tried to engaged them but were gunned down by combine team.

The Spokesman of the Division , Col. Aminu Eliyazu had earlier in a press statement said the gallant Soldiers and DSS invaded the new Enugu resident of Waney and shot him alongside his two gang members.

"Additionally, in continuation of the operation on Tuesday 21st November 2017, the troops also exhumed decomposing bodies of some of his victims in his shrine in the glaring eyes of the media who were invited to witness first hand" "Perhaps not satisfied with the numerous lives of innocent citizens he took, Don Waney masterminded the despicable New Year day mayhem in Omoku in which he led his notorious gang of criminals to murder 23 peace loving citizens of Omoku when they were returning from Cross Over Service at about 1:30am on Monday 1st January 2018,"

Eliyazu had stated earlier in his press statement.

He said intense surveillance activities on him and his gang by the Department of State Services (DSS) Rivers State Command revealed that after committing the atrocities, he relocated to a neighbourhood within Enugu Town in Enugu State where he rented an apartment and started living among unsuspecting neighbours within the community.

"From the relative safety of his newly-rented apartment, Don Waney was already perfecting plans to wrought another mayhem in Omoku in which he was to attack churches, schools, Army and Police locations and the residence of the generality of the already traumatized people of Omoku" "However, following his successful geo-location to his new Enugu neighbourhood hideout by the DSS Rivers State Command, a combined team of troops of 82 Division Nigerian Army Enugu and personnel of DSS Rivers State Command raided the hideout to arrest him and his other accomplices" "Incidentally on sensing that the combine team were closing in on his residence, Don Waney, his Second- in- Command (Ikechukwu Adiele) and another gang member (Lucky Ode) attempted to escape through the back exit of the apartment and were shot down by the eagle eyed troops in the process. One of them died on the spot while the other 2 who sustained gun shot wounds eventually died while being evacuated for medical attention," he added.
Posted by Unknown
Labels: Army