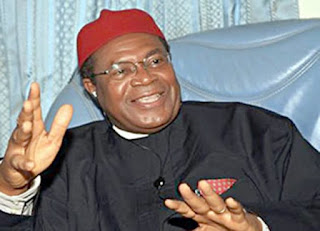 The Indigenous People of Biafra, IPOB, on Sunday distanced itself from a group, which disrupted the speech of the Ohanaeze President-General, Chief Nnia Nwodo, during the recently concluded summit in Enugu.

IPOB, however, blasted Nwodo’s leadership of Ohanaeze, stating that Ndigbo had since lost confidence in him.

It was reported that the summit, with the theme: “Handshake Across the Niger”, was attended by Yoruba, Igbo, South-South and Middle Belt leaders.

However, as soon as Nwodo mounted the stage to address the audience, on a speech which bordered on restructuring, a pro-Biafra group, consisting mostly of women gave interrupted with dissenting voices.

The group, which displayed banner suggestive of membership of IPOB, said they were not interested in restructuring but Biafra. One of such banners read: “Nnamdi Kanu we know, but who are you people”?

But in a statement, the IPOB spokesman, Comrade Emma Powerful said the IPOB know nothing about the group.

His speech read: “We note with shock, the story by a section of online media, that IPOB women humiliated Chief John Nnia Nwodo in Enugu on Thursday last week during the ‘Handshake Across the Niger’ event. Nothing could be further from the truth. We had nothing to do with it.

“We have pedigree, culture and proud tradition of announcing our activities ahead of time and also accepting responsibility for all our actions. Nwodo is inconsequential, irrelevant and completely beneath our station because of his treachery and wicked role in Operation Python Dance that consumed the life of hundreds of young activists. We cannot bring ourselves to belittle Nwodo in Enugu on Thursday because 99.9% of the people have no regard for him and his cash and carry Ohaneze Ndigbo. IPOB is not in the business of fighting with inconsequential Igbo pseudo leaders like Nnia Nwodo who has since lost the respect of the masses.

“While we respect the event and the presence of our brothers and sisters from the great Yoruba nation, we venture to state that the humiliation of Nwodo in Enugu on Thursday was most probably a spontaneous reaction by ordinary people of our land who find it quite amusing that the patently false narrative being driven by Lai Mohammed, Nnia Nwodo, S/E governors and Buratai that the agitation for Biafra restoration has been crushed, still published by a section of the press, is patently false. The inescapable truth is that our people are solidly behind our great leader Mazi Nnamdi Kanu.

“The fact remains that the under reported brutal genocide of mid September 2017 has totally eroded whatever respect Nwodo, Okezie Ikpeazu and other S/E governors had amongst the people. Today they are seen as traitors and sellouts who authorised the slaughter of their own people in order to placate a blood thirsty oppressor who delight only in perpetual domination and enslavement of others.

“Nwodo’s place in history will forever eve defined by his hidden role in Operation Python Dance, a stigma his children will bear for generations to come, if not for eternity. What befell Ukpabi Asika will definitely happen to Nnia Nwodo. His name will come to represent everything that is wrong with Igbo leadership since after the war.

“We don’t need to humiliate Nwodo in Enugu on Thursday, he is already finished since Python Dance. Nobody regards him around the East. His loyalty lies with core Arewa North, his friends are Aso Villa, GOC 82 Division, DG DSS and S/E governors. Nobody respects him anymore.

“Had IPOB mobilized our women to storm Enugu, the entire metropolis would not have contained our angry mothers. What we are telling Nwodo and his corrupt Ohaneze is this, never will he or his gang of Hausa Fulani slaves ever convene a public meeting anywhere on Biafran soil again.

Anywhere they gather, Igbo people will be there to show them how displeased we are with them.”
Posted by Unknown
Labels: Politics