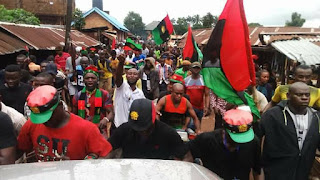 The Indigenous People of Biafra (IPOB) on Wednesday accused the British Broadcasting Corporation, Cable Network News, Al Jazeera and other foreign media of conspiracy of silence in the reportage of killings by herdsmen in most Nigerian communities.

The group also blamed the President Muhammadu Buhari led administration for taking the continuous killings of the Fulani herdsmen as normal.

IPOB’s Media and Publicity Secretary, Emma Powerful, in a statement said the media houses’ under reportage of the killings was part of the international conspiracy to subdue non-Muslims.

IPOB, however, condemned the recent killings in Rivers and Benue states, adding that the group wondered why the Federal Government was reluctant to deploy soldiers in Benue, Taraba and Kaduna states where herdsmen had killed scores of people.

It said, “The killing of the innocent has become the norm under this present All Progressives Congress government led by Major General Muhammadu Buhari.

“More shocking is the fact that world media like CNN, FOX, BBC, Al Jazeera, NBC, ABC etc have remained conspiratorially silent on these horror shows played out in predominantly Christian towns and villages; probably because those being killed are not Muslims.

“We are bombarded daily with news about the suffering of Rohingya people and threats of economic and military sanctions against Myanmar but something far more sinister is happening in Nigeria and especially in Biafraland with no iota of coverage from leading media houses around the world because those being killed in Nigeria are non-Muslims. Only when Muslim populations are affected do we see international condemnations and sanctions.”

It added: “Primarily, the recent humiliation, killings and the level of massacre going on in Igweocha (Rivers State) is politically-motivated and orchestrated by the Nigerian government and her security operatives especially the Army, Police and the DSS, to depopulate the region of vibrant youths, the only group that is capable of checkmating marauding Fulani herdsmen.

“We are still wondering why the Nigerian government could not send soldiers to the aid of its citizens in Benue, Taraba, Kaduna and other states where Fulani herdsmen are rampaging and massacring innocent citizens with impunity.

“We are certain that Aso Rock merely ordered the IG of Police to relocate the police headquarters in Abuja to Benue to provide cover for these murderous Fulani herdsmen and help them consolidate their hold on new territories they are now occupying.”

“If the Nigerian government and her security agencies are sincere about tackling the menace of murderous Fulani herdsmen, they must also deploy their soldiers in Benue and Taraba states with the same shoot on sight order they readily apply against peaceful Biafran agitators.

“The world must wake up to the threat that Fulani terror herdsmen represent before it’s too late,” the statement reads.
Posted by Unknown
Labels: News