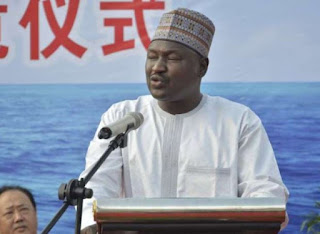 The Nigerian government on Monday said it would seek an order of court for Channels Television to produce a video copy of an interview it had with a senator, Isah Misau.

The interview, according to prosecution counsel, Alex Izinyon, contains details of the allegations that the senator representing the Bauchi Central District, Mr. Misau, spread falsehood against the Inspector-General of Police, Ibrahim Idris.

In an interview on the Politics Today live progranmme of the Nigerian private television in August last year, Mr. Misau had leveled allegations of corruption against the Nigeria police.

According to the charge against him in court, Mr. Misau falsely accused the IGP’s office of collecting millions of naira from police officers seeking promotion in the service.

The senator was also accused of falsely alleging s*xual misconduct against Mr. Idris. On Monday, the prosecution amended the charges from five to seven counts.

Mr. Misau is also accused of falsely linking the office of the IGP with fraudulent collection of at least N10 billion from individuals and oil marketers to provide them security.

The senator who was present in court, pleaded not guilty to the amended charges.

After taking his plea, the prosecution informed the court of its desire to produce three witnesses in the next sitting and to request a subpoena for service to Channels Television, which aired Mr. Misau’s interview.

Speaking with journalists after the court hearing on Monday, Mr. Izinyon said the aim of the subpoena is to help show the court the video of the discussion Mr. Misau allegedly had with the media wherein the allegedly false information was disseminated.

Mr. Misau’s allegation came shortly after the senator engaged in a series of verbal war with the IGP. In reaction to the allegations made against Mr. Idris, the police accused Mr. Misau of leaving the force without properly executing his retirement.

That allegation was however refuted by the Police Service Commission.
Posted by Unknown
Labels: News