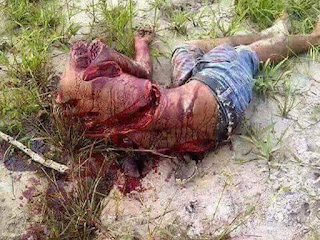 Former aviation minister and ardent critic of Buhari-led administration, Femi Fani-Kayode has reacted to the Benue All Progressives Congress, APC, Chairman Comrade Abba Yaro’s statement that recent killings in the State is a case of ethnic cleansing.

Mr. Yaro had described the massive killing of over 50 Benue people by the Fulani herdsmen as an invitation for civil war.

He described the recent killings as an attempt to spark second civil war in Nigeria, insisting that, it was a clear case of ethnic cleansing around the Benue Valley which must be stopped immediately.

Reacting to the statement, the former minister expressed joy that someone from the APC party was finally making sense and coming to terms with brutality of Fulani herdsmen. Chief Fani tweeted as follows;

“Finally someone in the APC is talking sense. “I said this over two years ago and was insulted for it. Eyes are now opening. I guess its better late than never.” 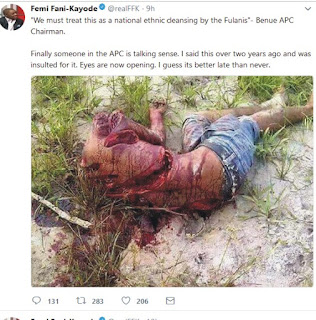