FCC JONES AS A REPROBATE By Collins Ughalaa 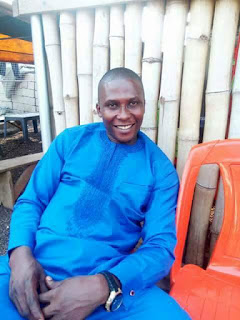 One of the problems in Nigeria today is the dilapidated healthcare infrastructure. This has brought many unpleasant consequences to Nigeria as a nation.

On the streets of Nigeria today, due to the frustrations that envelop the country, it is difficult to point a finger on whom a real mad man or woman is, just because we lack both the skill set and infrastructure to identify mad men on the streets.

If we had the requisite healthcare infrastructure, we would have seen the obvious need to take FCC Jones for psychiatric examination, to know whether he is not a mad man.

Moreover, one of the  reasons Nigeria has not been able to solve her problems is that there are so many people moving about on the streets who lack good parental upbringing. It is either they are bastards or they were brought up by one parent or no parent at all, or they were abandoned to their angry and frustrated grand parents.

When bastards like this grow up they tend to unleash their anger and frustrations on the society. That is why Nigeria has been suffering.

Last year FCC Jones threatened to sue me and some newspaper publishers over some articles. He claimed I called him a bastard. This time around he has resorted to claiming that he has a superior upbringing than me. But let me tell him a little about myself, and I will expect him to also tell us a little about himself, so that we can really know those born out of wedlock or who is a bastard.

My name is Collins Chibueze Ughalaa. I am one of the sons of Mr. Eric Ughalaa Ozurigbo. My father properly married my mother, Mrs Nwabuaku Juliana Ughalaa Ozurigbo (nee Nwaeze), whose father was also a first class chief. Despite decades of their death, the names of my grandparents have continued to ring bells in my community.

When I move about in my community with my wife, people tell her beautiful stories of my parents, and they do us a lot of favours until we are embarrassed. This is not withstanding that my mother died decades ago.

As early as the 70s when most people did not embrace education in the rural communities, my parents, who were successful farmers (in fact, they were adjudged the third most successful family, after Odu na Onwubu) had sent two of their sons to school at the then popular Trinity High School Oguta, after which they got higher education. And by the grace of God, I went to school too.

I don't beat my wife and send her out of the house. I am happily married and we don't engage in street fight. We enjoy our awesome love with our children and we have not gone to the welfare to disgrace ourselves or to the police station to make shameful statements. No friend or boss has ever intervened or advised us on how to resolve any problems. I have never accused my wife of engaging in extra marital relationship and I never accused her of being impregnated by another man. Can FCC Jones say anything like this about himself? Can he tell us a brief story of himself, whether he was born out of wedlock or not? Can he tell Imo people whom he said impregnated his wife? Why did they go to the welfare? How did they resolve it?

There is need to also remind this reprobate that it is very easy for a thief to accuse another person of stealing. That was why he accused me of collecting money from politicians and licking their boots. Apart from FCC Jones who is notorious in blackmail and jumping from one politician to another,  no politician in Imo State, from the Governor to the last person, can accuse me of collecting or requesting money from him or her.

I know the house of only one politician. Can FCC Jones say same of himself? Can he tell Imo people how many politicians' homes he visited this past Christmas and New Year celebrations? Can any politician say that I visited him or called him?

When I celebrated my birthday, did my child dedication and buried a brother within a period of two months, I never asked for favours from any politician. But FCC Jones quarreled with Hon Chike Okeafor because he did not help him solve a problem.

You would know a bastard when you see one, and by their fruits you shall know them. It is only a reprobate that can summon the courage to compare a man who put 57% Imo people out of the poverty line with the Governor who spreads poverty like butter on the bread and shamelessly put 19% Imo people out of the poverty line 5 years after. It is only a moron that can compare a man who handed over more than N26bn to his successor in 2011 with the Governor who has within 5 years plunged the state into N93.27bn debt. Or ever compare a man who provided the best transport system in the state with a man who has failed in the same regard.

What kind of man would support a Governor who promised industrialization and job creation but failed, only to turn around to continually demolish homes, shops, markets and dislocate businesses?

It is only a bastard that can conjure reasons to talk about the son-in-law to the Governor who did not have more than N100,000 in his bank account in 2011 but who has become a billionaire over night. It is only a man whose upbringing is faulty that can say that the man who did not pass his job interview few years ago is a proud overnight billionaire. No man who knows his father can dream of doing this. He would have some shame to even think about it. But a bastard has no shame. He is glad to say that right is wrong and wrong is right because he has no moral fiber in him to stand for what is right, because he has a faulty foundation.

While we give it to FCC Jones that he is flocking with birds of the same feathers, he should know that His Excellency Dr Ikedi Ohakim is a private citizen who reserves the right to keep his private life private. He can decide to disclose the beneficiaries of his mentorship programmes or not to do so. But can FCC Jones equally request Governor Okorocha to publish the audited accounts of Imo State from 2011 till date?

But just wait! We will see again in FCC Jones on the Golgotha.
Posted by Unknown
Labels: Opinion