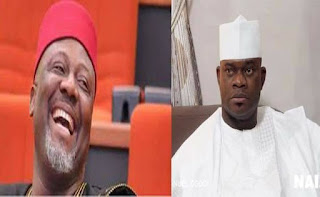 This is coming after Gov. Bello reportedly threatened that many members of the National Assembly will not return in 2019.

Dino , in a Video on his Instagram, wondered why a sane Governor will say such.

He said, ”I begin to ask myself why will any intellectually mobile character, sound and sane, speak like that.

”And if anyone wants to talk like that, it’s not a man that has commited electoral fraud, who is awaiting trial and obviously will soon go to prison. ”

”And I had a dream recently where I saw Yahya Bello’s prison uniform specially decorated with embroidery, so I’ll be shocked that Yahya is already threatning people not to come back because, he’s not a voter in Kogi State.