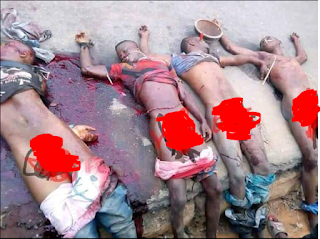 Four suspected cultists and two others were killed in three attacks yesterday in three Local Government Areas of Rivers State.

The killings came four days after the notorious New Year dawn attacks in which 17 people were murdered.

Commissioner of Police Zaki Ahmed confirmed the attacks in Emohua and Andoni at a news conference.

According to reports, trouble started at Ahoada yesterday when a local viligante group in Ogba/Egbema/Ndoni LGA(ONELGA), known as Onelga Security Planning Advisory Committee (OSPAC), on tip-off, stormed and attacked the hideout of a notorious gangster in Ahoada and opened fire on them.

Four of the hoodlums were said to have died in the attack, one of them was arrested for questioning.
Posted by Unknown
Labels: Crime