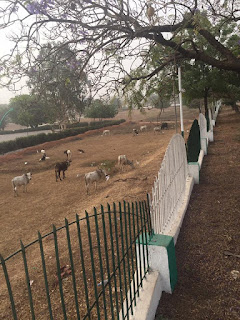 An Enugu based lawyer and journalist, Chijioke Okibe, has revealed his displeasure after seeing some cows grazing openly at the "highly-secured" Michael Okpara square in Enugu state. According to him, the popular Okpara square which is used for series of top events in the state - is not open to citizens who want to exercise there but is allegedly opened to cows for feeding. 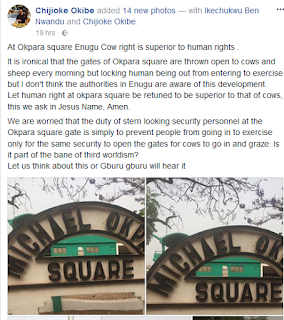 It is ironical that the gates of Okpara square are thrown open to cows and sheep every morning but locking human being out from entering to exercise but I don't think the authorities in Enugu are aware of this development. Let human right at okpara square be returned to be superior to that of cows, this we ask in Jesus Name, Amen. We are worried that the duty of stern looking security personnel at the Okpara square gate is simply to prevent people from going in to exercise only for the same security to open the gates for cows to go in and graze. Is it part of the bane of third worldism? Let us think about this or Gburu gburu will hear it.... 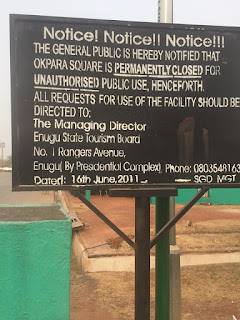