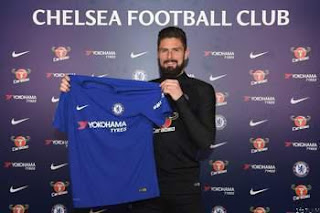 Chelsea have completed the signing of Olivier Giroud from Arsenal for an estimated £18 million.

The France international will join the Blues on an 18-month contract with an option to extend it for another year after the two clubs agreed a deal on Wednesday.

The move has now been made official after Arsenal confirmed the signing of Pierre-Emerick Aubameyang from Borussia Dortmund, who have just loaned Michy Batshuayi from Chelsea.

A triangle of transfers developed between the three clubs over the last few days of the January transfer window, with each move seemingly hindering on one of the others going through.

While Dortmund wanted Batshuayi as Aubameyang's replacement, Chelsea were reluctant to let him go without bringing in another alternative to Alvaro Morata and turned to Giroud after failing to land Edin Dzeko from Roma.
Posted by Cheta Igbokwe