Biafra: IPOB reacts to court’s final verdict on its proscription 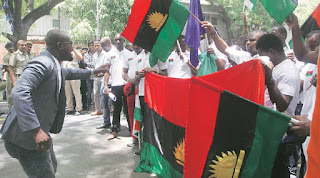 The Indigenous People of Biafra, IPOB, on Friday faulted an Abuja Federal High Court judgement affirming it as a terrorist organisation.

Reacting to the judgement, the pro-Biafra group wondered how the judge came to the conclusion even when there is no evidence whatsoever to indicate that IPOB is an armed or violent group like Fulani herdsmen.”

In a statement signed by its spokesperson, Emma Powerful, the group challenged the judge, Department of State Services, DSS, and the Attorney General’s office to name “one verifiable incident of breach of peace, murder, arson or rape- usually associated with their fellow Fulani herdsmen – that IPOB has ever been associated with?”

The pro-Biafra group maintained that Justice Kafarati’s ruling was a confirmation to the fact that “Nigeria is indeed a shit-hole.”

The statement reads, “It didn’t come to us as a surprise that the Federal High Court of Nigeria in Abuja on Thursday the 18th of January 2018, upheld it’s obnoxious order proscribing the activities of IPOB, when everybody knows that the organisation is peaceful and have not killed an ant, talk less of taking a human life.

“Acting Chief Judge Justice, Abdu Kafarati while delivering on the application brought by IPOB, resolved that the order he made on 20th September 2017 proscribing IPOB was validly issued. We remain at a loss to understand how the court could have come to this conclusion in view of the fact there is no evidence whatsoever to indicate that IPOB is an armed or violent group like Fulani herdsmen.

“Simply put, a judge cannot be ignorant of the law and at the same time lacking in conscience. What Abdu-Kafarati has displayed, by upholding his originally flawed judgement, is nothing short of judicial impunity, recklessness and raw wickedness. He failed to address all the issues before him but rather chose to be selective. The simple question which ordinary people have been asking all along is this. What activity or aspect of IPOB operations can be regarded as constituting a terrorist act?

“Can Judge Abdu-Kafarati, the DSS or Attorney General’s office name one verifiable incident of breach of peace, murder, arson or rape- usually associated with thier fellow Fulani herdsmen- that IPOB has ever been associated with?

“Instead of addressing these simple questions, Kafarati spent all his time outlining why tagging IPOB a terrorist organisation inside his chambers is legal.

But that wasn’t the question before him for determination. How can you term an organisation a terrorist group when that group has not done anything remotely resembling a terrorist act. There is no recorded or verifiable instance of violence associated with IPOB, unless holding public rallies, right of assembly and association constitutes a terrorist act.

“It is shocking that IPOB, a world acknowledged peaceful movement duly registered in more than 88 countries of the world, was tagged a terrorist organisation in a court of law of a supposedly civilised country. Under such circumstance, it will be difficult to fault President Trump’s description of Africa as a “shit-hole”. Such travesty of justice, like the labeling of IPOB, a peaceful organisation a terrorist group by a supposedly learned and impartial judge of a High Court, while the state reward and protect known killers like Fulani herdsmen.

This mind blowing absurdity cannot obtain anywhere else in the world except in black Africa. “
Posted by Unknown
Labels: News