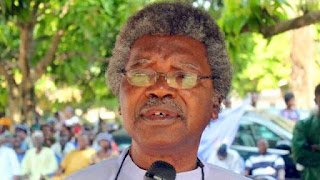 The Northern Elders Forum, NEF, has disowned what it called a “partisan statement” made by its leader, Paul Unongo against President Muhammadu Buhari and a former Vice President, Atiku Abubakar.

Mr. Unongo had in a chat with Punch newspaper recently accused Mr. Abubakar of being the chief financier and most influential member of the Miyetti Allah Cattle Breeders Association of Nigeria, the apex body of Fulani herdsmen in the country.

Many people have been killed in Benue State, where Mr. Unongo is from, by suspected herdsmen.

The NEF leader also accused the administration of President Muhammadu Buhari of treating the herdsmen crisis with kid gloves.

He said Mr. Buhari had refused to heed the advice of NEF on the farmers/herders clashes.

NEF in a statement on Saturday said it “regrets to have to publicly disown yet another controversy by Unongo in this recent times.”

The statement, which was signed by Mr. Unongo’s deputy, Sani Zangon-Daura, said while Mr. Unongo “reserves the right to hold and express personal views against any issue, he however does not have the right to drag the entire Forum into unnecessary controversies at will.”

NEF also advised Mr. Unongo that if has any grudges against any personality or group, he should vent them in his personal capacity and not use the platform of the forum.

“Again we are not aware that President Muhammadu Buhari has refused to heed our advice on this matter as there was never any such advice contrary to Mr. Unongo’s claim in the report.

“It is on record that since inception six years ago, the Forum has never been this controversial in its approach to issues and never committed itself on anything without finding solid grounds.

“But since the transition that followed the death of its founder and pioneer leader, the Danmasanin Kano Alhaji Maitama Sule, it has unnecessarily been dragged from one controversy to another.

“The Northern Elders Forum hereby condemns in totality all forms of unnecessary attacks or reprisals carried out by any ethnic group, in whatever guise in Kaduna, Plateau, Rivers, Zamfara, Nasarawa, Benue and Kogi states and indeed other parts of the north and the country generally,” the statement said.

The NEF also called on the government to urgently act against such lawlessness by identifying the perpetrators and dealing with them in the same way other disturbances in the North-east and other parts of the country are being dealt with.
Posted by Unknown
Labels: Politics