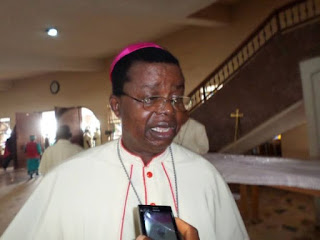 The Catholic Bishop of Awka Diocese, His Lordship, Most Rev. Paulinus Ezeokafor, has described the proposed setting up of grazing reserves and colonies for herdsmen as a time bomb waiting to explode.

He emphasised that ranching remained the only solution to the Fulani herdsmen and farmers’ clash.

The cleric added that deploying the officers and men of the Nigeria Police to the troubled state may not yield the desired result.

He challenged the Nigeria security agents to apply similar measures used in unmasking those behind the killings of over 20 worshippers on New Year’s Eve in Omoku, Rivers State, in fishing out those behind the Benue massacre.

Bishop Ezeokafor wondered, “why the Federal Government should even deploy police to tackle such heinous act which he said left so many people dead.”
Posted by Unknown
Labels: News