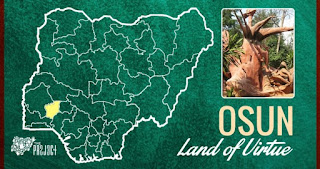 Osun has been ranked the second less miserable and poverty-ridden state in 2017.

The state was placed the second wealthiest among the 36 states of the federation, according to a report released on Monday.

The Financial Derivatives Company, which released the report, in its presentation, titled: “How the States Performed in 2017,” by its Managing Director Bismark Rewane, said in one of the top three economic analysts in Nigeria, Osun had the lowest net Federal Account Allocation Committee (FAAC) allocation but was not delinquent in the payment of salary arrears.

The report showed that Osun is the second best in the measured “Misery Index” with a 16.37 per cent inflation rate, which also sums up with the rate of under-employment and unemployment.

The report noted that despite the financial quagmire states experienced in the last financial year, the ingenuity of the Modulated Salary Structure by the state government yielded positive results.

The report also outlines the core indices of a structurally balanced, growing and diverse economy, which is coming for the second time in six months from veritable and independent sources – the first from the United Nations (UN) Multi-Dimensional Poverty Index 2016 and now the FDC Misery Index 2017.

The Misery Index figures also showed that aside Taraba, Ogun and Lagos states, are key players in Nigeria’s Industrial Base, but still have huge poverty index with a definite number of its citizens living below the normal living standards as set by the World Bank and the International Monetary Fund (IMF).
Posted by Unknown
Labels: Politics