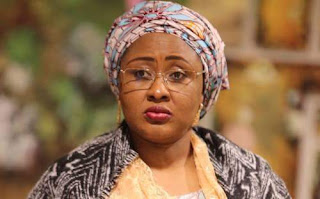 Mrs. Buhari, on her verified Instagram page, reposted videos by two senators, Isah Misau and Ben Bruce, accusing her husband of appointing incompetent persons because they “belong to the cabal.”

The videos by OakTV shows Mr. Misau saying 50 per cent of the ministers in Mr. Buhari’s administration “are not performing”.

The second video, also from OakTV, showed Mr. Bruce, who supported Mr. Misau’s stance saying Nigeria is becoming lawless.
“We either have a government or we don’t…” he said.

The third video showed Mr. Misau saying the government has only three months to correct the anomalies, saying “it’s as if the president is not in charge.”

Some Nigerians on twitter obviously in support of what Mrs Buhari did, had this to say;

“ If Aisha Buhari has turned against her husband, President Buhari, who the hell are you to append your brain in support of Buhari who has been rejected right from his room, his bedroom, his family. Pls go see a psychiatrist or see an exorcist for deliverance!