ABUJA LAWYER R*PES A 17-YEAR-OLD GIRL IN HIS HOUSE. 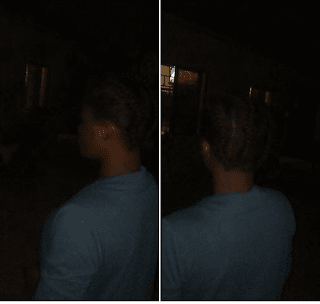 I bring before you a matter concerning Esther Monday, 17, allegedly assaulted, gagged, tied down and defiled by a certain Onyemobi Ochiagha Chucks, a lawyer based in Abuja. I was at the Gwarimpa Police Station where I monitored the proceedings for more than six hours.

According to Monday, she began working for Chucks barely a week ago after she replaced a relative of hers at his house when she had to go back to Kafanchan, Kaduna State. Monday is one of thousands of young vulnerable girls who come to urban areas in search of menial jobs.

Chucks had specifically requested Monday’s Guardian to provide an alternative for the relative who wanted to take a break.

Chucks initially engaged Monday to clean his house and water the garden in his home in Gwarimpa. But on Thursday, the lawyer curiously asked her to move to his office, also, in Gwarimpa to help in cleaning and office work. Unsuspecting, the poor girl went along. After working and cleaning the place, Chucks allegedly began making overtures to her; complementing her on her beauty…

As she further narrated, her boss suddenly stood up, went to the door, bolted it; headed to the windows and sealed them. Monday was too petrified to act initially. Then the lawyer pounced on her, tied her up, gagged and blindfolded her. Chucks, according to her, went ahead to strip her Unclad. He forcefully had canal knowledge of her, she alleged. It was Monday’s first s*xual encounter, she claimed at the police station.

Rather than release the girl, the lawyer still kept her detained.

He further seized her phone from her, extracted the sim card. After some hours, he ordered the girl to go back to his house warning her not to say a word. To ensure compliance, he took the girl to the road and put her in a commercial tricycle giving direction to the driver to take the girl to his own house. It was at this point the girl took the initiatives that have probably saved her life.

Explaining in Hausa, she narrated her ordeal to the driver and begged him to give her his phone because hers had had its sim card removed by the lawyer. The driver obliged her.

With the phone, she called her guardian who rushed over to the lawyers house to rescue her.

I got all this details from the girl and her guardians at the police station. I got to the police at about 5.pm and began further enquiry. At face value, the police appeared to have been professional. After listening to her , they took the girl to a hospital for medical confirmation of her claim. They summoned the lawyer who delayed coming to the station. I called his number, too, but he simply said he doesn’t know me and wouldn’t speak to me. At about 8 pm the lawyer came to the police station.

After making initial conversation with the DPO, the girl and the lawyer were again taken to the hospital. Some hours later, they returned. I gathered that the lawyer refused to submit himself for test. But I was reliably informed that the doctors said he could perceive the smell of sperm in her v**ina.

Curiously, I noticed that some police officers began to be apprehensive at my presence at the station, one of them, a tall dark complexioned youngman with drooping eyelids.

He summoned me after he saw that I had closely been watching his movements with the lawyer. He first attempted to throw the relatives of the girl out of the station but failed. Then he came over to me asking what I was doing at the station. After calmly showing him my ID, he then asked me how I got to know about the case. “Who told you that the man has been indicted, ” he asked.

After calmly explaining to him that I am at no liberty to disclose my source, I further went ahead to tell him that story writing for a good reporter doesn’t begin after indictment. He reluctantly gave it rest. 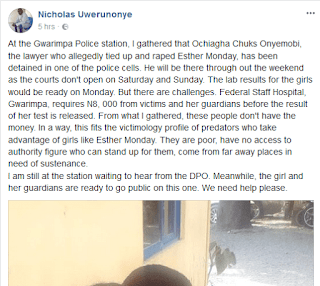 Colleagues, I am headed back to the station to speak with the DPO to get a clearer perspective on the matter. While not indicting the lawyer of any crime, I believe that the man has some explaining to do, especially given the maneuvers I personally saw him pull. Chucks, the lawyer, is Igbo, like me, and so is the police officer who tried to intimidate me and the girl’s relative. Esther Monday is from Kafanchan and I do not know her. This is about justice and it knows no tribe. I am sending out this message because I understand how things are done in this country, no matter how we pretend otherwise.
Posted by Unknown
Labels: Crime