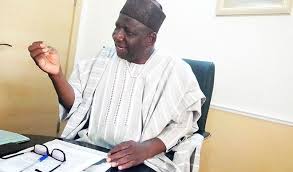 The Action Democratic Party (ADP) has rejected the timetable and schedule of activities for the 2019 general elections, which was issued by the Independent National Electoral Commission (INEC) on Tuesday.

National chairman of the party, Engineer Yabaji Yusuf Sani, who addressed journalists yesterday in Abuja, faulted the scheduling of the presidential election before the governorship poll.

Engr. Sani claimed this was a plot by the ruling All Progressives Congress (APC) to rig the polls next year.

“The order of the elections as released by the INEC is one thing we are not comfortable with because once you have a president sitting there, then he calls the shots.

“He can have his way against the wishes of the people of the country. So, this is one area we are not comfortable with and I think that area can be looked into,” Sani said.
Posted by Unknown
Labels: Politics