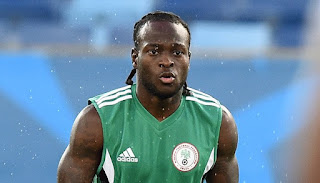 Super Eagles forward, Victor Moses has said that his teammates at Chelsea have written off Nigeria ahead of the 2018 World Cup in Russia.

The Super Eagles were drawn in the Group D of World Cup alongside Argentina, Croatia and Iceland.

Moses, while pointing out that Croatia and Iceland will be difficult games for the Eagles, insisted that Argentina will be scared of facing Nigeria.

The Chelsea winger told Mirror, UK, “We don’t want to play against Messi, but it is what it is. We’ve got to go and play our football and see what happens.

“After what Iceland did last year [beating England in the last 16 of the Euros], football nowadays, there’s no easy game.

“Argentina are going to be scared of us as well.

“It’s all about football at the end of the day.
“Everyone at Chelsea was saying we’re going to get a thrashing and we’re not going to make it through the group stage.

“Hopefully, we can go out there and make the nation proud and get out of the group.”
Posted by Unknown
Labels: Sports