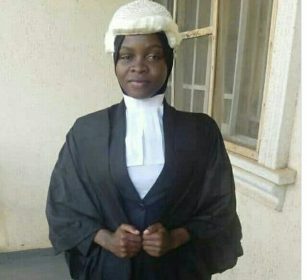 AMASA Firdaus, a Muslim faithful who graduated from Nigerian Law School (NLS) and was refused her call to bar for failing to remove her hijab, has said her defiance was to challenge the status quo.

Firdaus, made her stance known in a chat with Premium Times.

She described the actions of the Nigerian law school as "a violation of her rights".
She is a graduate of University of Ilorin (UNILORIN).

She has since been cautioned by the Muslim Students Society of Nigeria not to speak on the controversial issue again.

She also said having studied law for years there was no where the law prevented female Muslim lawyers from wearing hijabs.

Asked what motivated her to take the decision, she explained that she wanted to change the narrative and give Muslim sisters the rights to express their constitutional rights as enshrined in the constitution.

“My major concern is the approval of Hijab so that every person coming behind me will be able to use it for the call to bar (ceremony).

“My demand is that Hijab should be approved.”

“They just call it convention that the British gave to us and we have to stick to it. I used them. They complained (during) my first (law) dinner. That is how they do on the campus. You don’t wear hijab for dinner but I did. I chose Abuja because I knew they were a little lenient," she reportedly said.

Asked why she did not wait to be called to bar before embarking on the campaign, she said those who removed their hijabs in the past did nothing to change the situation.

“People have been removing their hijab over the years. What have those people who have removed it done?”

She thanked the Muslim community saying their support for her demand has been impressive.

Already, the Muslim Students Society of Nigeria has said it would write the presidency over Firdaus’ inability to attend the call to bar ceremony.

The national leader of the MSSN, Jameel Muhammad, described the restriction on the use of hijab as “Islamophobia.”

He said if the issue was not resolved by the presidency and national assembly, the society would resort to legal action.

“Then we might have to approach the court of the law. Already our lawyers have taken her brief,” he said.

However, the President of the Nigerian Bar Association, AB Mahmoud, said the controversy surrounding Firdaus’ use of hijab was needless.

Mahmoud posted a picture of his daughter in hijab on the day she was called to the New York bar.

He said the issue would be addressed.

The incident, took place at the International Conference Centre, Abuja, on Friday.

The case has attracted significant attention on social media, with Nigerians divided on her decision and that of the authorities of the law school.

While some are in support of her decision in respect of constitutional right to freedom of religion, others condemn her action, insisting that law school is no respecter of religion, therefore laws should be obeyed.
Posted by Unknown
Labels: Career