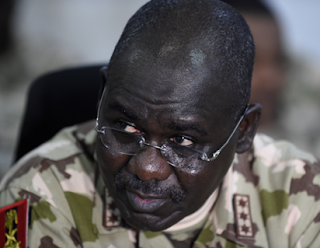 The Nigerian Army on Saturday vowed to expose those he described as political collaborators of Boko Haram terrorists, just as it denied an online publication that the Chief of Army Staff, Lieutenant General Tukur Buratai was ambushed and wounded by Boko Haram.

In a statement released by Director, Army Public Relations, Brigadier General Sani Usman, the military said Buratai was not involved in any ambush on his way to pay courtesy visit on troops, adding that “there was no recent ambush against any of our troops anywhere, let alone the North-East.”

The army noted that the troops were currently dealing decisive blows on the Boko Haram terrorists in the Lake Chad area, insisting that over 60 of the terrorists had either been captured or neutralised in the last three days. It insisted that there was no recent ambush against
any of its troops anywhere and urged the public to disregard the ambush story, pointing out that the Chief of Army Staff, who has been conducting his official duties, is hale and hearty.

The statement read:”No amount of mischief or campaign of calumny under any guise will distract Buratai from his determined efforst of leading a responsive Nigerian Army in the discharge of its constitutional roles.’’

The Course, which was inaugurated on June 16 2017, groomed the participants in airpower education and its application while preparing them to lead in the strategic environment with emphasis on the employment of airpower in both joint and independent operations.

During the ceremony, the Chief of the Air staff (CAS), Air Marshal Sadique Abubakar, who was represented by the Chief of Training and Operations, Air Vice Marshal (AVM) Nurudeen Balogun, congratulated the participants on the successful completion of the Course. Speaking further, he urged them to bring to bear, the skills and lessons acquired during the Course with utmost sense of patriotism.
Posted by Unknown
Labels: Politics