Menu
Home » Politics » "We Were Broke, My Friend Gave Me N200m After I Prayed, Fasted For 3 Months"- Amaechi

"We Were Broke, My Friend Gave Me N200m After I Prayed, Fasted For 3 Months"- Amaechi 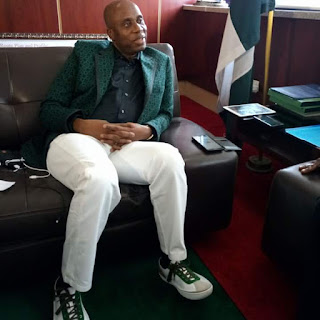 Rotimi Amaechi, minister of transportation, says after praying and fasting for three months, God used a friend to help him raise N200 million needed for his personal expenditure and litigation fees to reclaim his mandate in the 2007 election.

Although Amaechi won the primary election of the Peoples Democratic Party (PDP), it was Celestine Omehia, his cousin, who represented PDP in the election.

Amaechi had headed to the court and after six months of legal battle, the supreme court sacked Omehia and he was eventually sworn in.

Speaking at a thanksgiving service in Port Harcourt, Rivers state capital on Sunday, the minister charged the congregation to believe in the power of prayer.

“The truth is that we believed God. Some who didn’t believe left us just as they are leaving now. God told me that what he will do in Rivers State will tingle the ears, and I believed,” Amaechi said.

“We were so broke, we could not pay legal fees or children’s school fees. My wife prayed every day and night. I was fasting and praying for three months. I told God ‘I have a friend who has money, please make him remember me.’

“I called my friend and he told me he has been looking for me. I told him I was in Ghana and he asked for my account… He sent me Two hundred million naira. This is just to tell you that I believed God and he answered me.

“We must all go back to God in faith and prayers. Those who want to leave can go. I have come to understand that God passes us through these challenges to prove himself. Now that they have left, for me, this is an opportunity for the youths. It is your turn. You must ensure that we get to power for you to fill the vacuum left.”

He said if members of the All Progressives Congress (APC) did not pray, 2019 will “be very far from us”.
Posted by Unknown
Labels: Politics