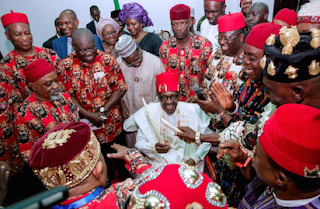 Leader of Biafra Independence Movement and founder of Movement for Actualization of Sovereign State of Biafra, BIM-MASSOB, Chief Ralph Uwazuruike has said that Ndigbo are superior race in Africa and that under the present Nigerian government, Ndigbo are staring face to face with the brutal reality and the youths can not develop their God-given potentials. President Buhari conferred with the title of Ochioha NdiIgbo 1 by South East traditional council of rulers led by Eze Eberechi Dick during his visit to Ebonyi State on 14th Nov 2017 He stated that it is regrettable that today, under the present Nigerian government, Ndigbo are staring face to face with the brutal reality that the full energies and potentialities of their youths would never be realized in Nigeria, but only in Biafra when the government takes off. Uwazuruike who spoke in a press statement issued on his behalf by his Director of Information, Mazi Chris Mocha, from the MASSOB’s Headquarters, Owerre-Okwe in Onuimo LGA of Imo state, said he could not accept to belong to Nigeria where an Igbo man can never be president, minister for works, minister of petroleum, federal capital territory (FCT), Chief Justice of the federation among others. According to Uwazuruike, “I reject slavery in all its ramifications and I must emphasize that if there was equity, fairness and justice, even if you were pushing any region to secede, such a region will be saying no to secession but a situation where there is no equity, justice and fairness, what do you expect Ndigbo to do?”. He added that Ndigbo are superior race in Africa, in terms of hard work, determination, perseverance and the spirit of never giving up, stressing that today if football were to be ranked like in the military, the likes of Austin Jay Jay Okocha, Sunday Oliseh, Kanu Nwankwo and many others would have been decorated with the epaulets of field marshals. Uwazuruike who contended that his interest was the liberation of Igbos from the shackles of bondage, revealed that the desire by some Nigerians to go on with one Nigeria is because the East is being cheated and its oil expropriated. “For every Emeagwali, Nnaji, Oliseh, Nwankwo, Onumah whom the world is seeing today there are thousands of other Igbo potential great minds who are still frustrated in Nigeria and can never realize that they are great minds not to talk of realizing their potentials because of the repressive environment of Nigeria that is injurious to their enterprising spirit. The Biafran leader mentioned another Igbo student, Mr. Osita Onumah who broke 124 year academic record in the imperial college, London with a mind boggling Grand Point Average (GPA) of 4.98 as part of the potentials he is talking about. He disclosed that in the field of science and technology, the second best robotics Engineer in the whole world Prof. Bartholomew Nnaji is an Igbo man, adding, “Another Igbo man, Dr. Philip Emeagwali had to beat the Yankees in their own game and made away with the prize of designing the fastest computer in the whole world”. He recalled that the former United States president, Mr. Bill Clinton during his working visit to Nigeria acknowledged this rare gem of Ndigbo, adding that there were many other Emeagwalis whose potentials are still being frustrated in Nigeria, even as he insisted that in Biafra, we shall accommodate and encourage the Igbo youths to realize their God-given potentials.