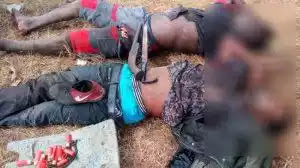 Operatives of the Ogun State Police Command have shot dead two suspected armed robbers who were members of a robbery gang that allegedly attacked Dangote cement company at Ibese in the early hours of Saturday.

It was gathered that the gang numbering about seven armed with guns and other dangerous weapons, invaded the company, moved to the materials’ section and attempted to steal armoured cables.

The state Police Public Relations Officer, Abimbola Oyeyemi, however, said luck ran against the hoodlums, as policemen on duty at the company were alerted by the company’s security men and they promptly moved to the scene.

He said when the robbers sighted the policemen, they(robbers) engaged them in a gun battle which lasted for about forty-five minutes.

Oyeyemi, however, said at the end of the encounter, one of the robbers was shot dead while another was arrested with serious gunshot wounds, but he later died on the way to the hospital.

He said the other members of the gang escaped with varying degrees of gunshot injuries.

Oyeyemi, an Assistant Superintendent of Police, explained that items recovered from the robbers were; one locally made single-barrelled gun, fourteen expended cartridges, dagger and a house-breaking equipment.

Meanwhile, the state Commissioner of Police, Ahmed iliyasu, while commending the gallantry displayed by his men, appealed to members of the public, especially hospitals to report anybody seen with gunshot wounds to the police.
Posted by Unknown
Labels: Crime