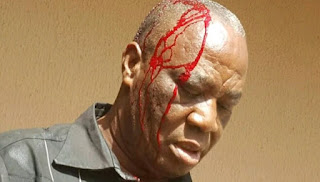 An official of the Federal Capital Development Authority(FCDA) escaped death by Whiskers on Thursday after a group of traders physically assaulted him.

The official simply known as 'Mr Dennis' was seriously injured on his head during the attack. The traders from Utako market attacked Dennis over an allegation of conniving with court officials to adjourn their case indefinitely.

They chased Dennis into the Legal unit of the court and would have killed him if not for the timely intervention of a police officer in the court premises. 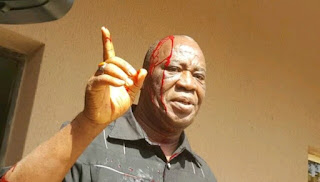 We learnt that the case between the Abuja Municipal Council Area, AMAC and Utako Market Traders Association was scheduled for a hearing today but things went downhill when an announcement came that the case could no longer be brought up because the Presiding Judge was absent.

The traders became incensed and started chanting songs and insulting the court officials. On sighting one of the FCDA officials(Dennis) heading to the Legal Unit of the court, they attacked him.

Utako market traders and the FCDA have been at each other's necks over plans by AMAC to demolish and revoke shopping licenses.
Posted by Unknown
Labels: Crime