PDP Chairmanship: How South-west Lost Out; GEJ, Others React 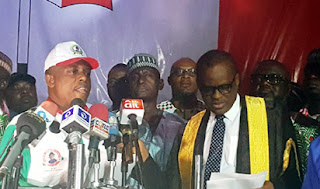 The South-West lost the opportunity of producing the national chairman of the Peoples Democratic Party, PDP, after Mr. Jimi Agbaje, who was the shoo-in candidate of the governors, was accused of abandoning the party at the time of the crisis instigated by the face-off with Senator Ali Modu Sheriff.

The expectation of the South-West zone was also compounded by the decision of the immediate past national chairman of the party, Senator Ahmed Makarfi, to open up the chairmanship contest to the whole south.

That decision, high party chieftains said at the weekend, was framed to also open up the presidential ticket zoned to the North to all areas of the North. Markarfi, who exited office on Saturday, had until the return of Atiku Abubakar, been considered the leading presidential aspirant in the party.

Meanwhile, multiple sources told Vanguard that some former PDP chieftains and some foundation members of the APC had been making overtures to rejoin or join the opposition party on account of developments at the weekend.

A senior party official privy to the developments that led to the emergence of Prince Uche Secondus as national chairman, said party elders had before the aborted Port-Harcourt convention of May 2016 agreed to micro-zone the position of national chairman to the South West.

Mr. Agbaje, who was the candidate of the party in the 2015 governorship election, was projected by the governors, following the resolve of the governors through Governor Nyesom Wike and the National Assembly caucus through Senator Ike Ekweremadu, the Deputy President of the Senate.

However, after the crisis broke out between the mainstream of the party and the Senator Ali Modu Sheriff faction, Agbaje, one of the very prominent party figures, was alleged to have become detached from the party.

“All the time we were in court, we did not see Agbaje. After the court judgment, when he now came and wanted to proceed from where we stopped, we told him to go away,” the normally reliable source disclosed at the weekend.
Posted by Unknown
Labels: Politics