Menu
Home » Politics » Shocker! Okorocha to Ohakim, Ihedioha: Shut Up!... You've No Right to Criticize Me

Shocker! Okorocha to Ohakim, Ihedioha: Shut Up!... You've No Right to Criticize Me 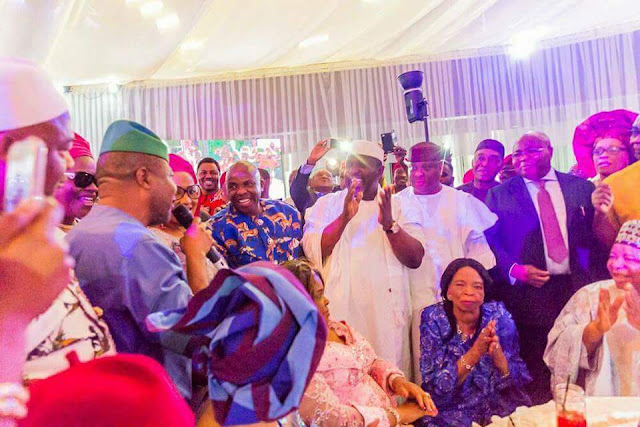 The Governor of Imo State, Rochas Okorocha has reacted angrily over criticism trailing his government for creating of the Ministry of Happiness and Purpose Fulfillment and naming his biological sister, Mrs Ogechi Ololo as Commissioner for Happiness and Purpose Fulfillment, as well as other sundry state issues like the erecting of statues for undeserved political heads especially that of South Africa President, Jacob Zuma.
The above discourse which has been trending in Nigeria and beyond has painted Okorocha’s Imo in bad light. Explaining the benefits of the new ministry, pained Governor Okorocha took to the cleaners his predecessor in office, His Excellency Dr.Ikedi Ohakim and former Deputy Speaker Federal House of Representatives, Rt Hon Emeka Ihedioha.
In an apparent frustration in the hands of Imo people whom he had accused of not seeing anything good in his administration, Okorocha went for the head of Peoples Democratic Party leaders, stating that "We also want to let the public know that the former governor of the State, Chief Ikedi Ohakim and the 2015 PDP governorship Candidate in the State Chief Emeka Ihedioha are the least qualified to criticize Okorocha on any policy or programme.
Ohakim, he said "was governor for four years and has no achievement to his Credit. And that administration could only be associated with the flogging of Citizens, including a Priest. Today, Owerri has twelve lane roads, 3 tunnels, two fly-overs, five in-land roads, four pedestrian bridges, street lights and befitting structures, Courtesy of Governor Okorocha.
On another PDP leader Okorocha have this to say "Chief Ihedioha was in the House of Representatives for 12 years and ended up being the Deputy Speaker but could not fix the only market called Nkwo-Mbutu in his ward, Mbutu, and all the NDDC Projects that have developed K-legs in the State are directly or indirectly linked to him.
"And that was the reason he could only extract victory in the three Local Governments of Mbaise where he comes from, with INEC, and all the federal agencies fully behind him during the 2015 election.
Rochas has more than 1000 Completed and verifiable projects located in various parts of the State. And his achievements have surpassed the achievements of all those who had governed the State before him put together. Anybody with contrary claim should come forward with his facts or verifiable claims." he stated.
In a press statement by his Chief Press Secretary, Sam Onwuemeodo and made available to Ifeanyicy.com, Governor Okorocha reinforce the believe that "At the end of the day, the achievements of the new Ministry of Happiness and Purpose Fulfillment will be so amazing that the critics of the initiative, will not only be shocked but will also regret to have drawn the curtain for the new Ministry even before it takes off.
The Chairman of APC Governor's Forum reiterated that "Ideas are like bullets. They pierce greatly. And Rochas Okorocha is a man of tremendous ideas who thinks about the present and the generations yet unborn. He does not misfire on any issue, the attendant criticisms notwithstanding. When the new ministry begins to bear the expected fruits, the accolades will envelop the early criticisms.
"We accept all the criticisms in good faith and commend the Critics. That is what makes the society dynamic and our democracy juicy. The truth is that, the new Ministry is not an accidental discharge but a well-thought out idea that will benefit Imo people in particular and all men and women of goodwill in general. We only ask the critics to give us time.
On South Africa President Okorocha have this to say "Some people have also talked about Jacob Zuma’s Statue as a referenced case. The criticisms that greeted Zuma’s Statue were all anchored on the Corruption allegations against the South African President. Yet, the fact remains that the man is still the President of that Country. He has neither been sentenced to imprisonment nor impeached as president following these corruption claims.",  the state reads.
He said "We also want to use this opportunity to reiterate that the Imo State government is not owing workers’ salary. The government has been upto date in the payment of salaries. And anybody still in doubt of this innocent claim, should read the Sunday Nation of November 5, 2017, page 13, where the State Chairman of NLC, Comrade Austin Chilakpu said that the State government is upto date in the payment of workers’ salary.


"On the issue of Pension, the government has also shown interest and commendable commitment to the payment of Pensions. In December 2016, the government cleared all arrears of Pension and began monthly payment this year and one hundred percent too. The government has only few months to clear and is not leaving any stone unturned to ensure that the few outstanding months are also cleared. We stand to be challenged on all our claims", he concludes.