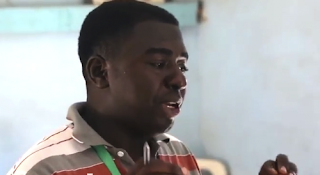 Moses Motoni, a staff of BudgIT Nigeria, is currently in the detention of the Special Anti-Robbery Squad (SARS) for an offense not known to him. His arrest happened one day after the Inspector General of Police, Ibrahim Idris Kpotum, gave an order to reorganize SARS operations across Nigeria following social media outcry calling for a total abrogation of the controversial unit.

Mr. Motoni, Project Tracking Officer of BudgIT, was arrested in Kaduna State by some unidentified SARS personnel who disguised as delivery men from DHL Nigeria.

It was learned that Mr. Motoni had been put under SARS’ radar under the instruction of Senator Mohamed Sani, representing Niger South Senatorial District of Niger State. Mr. Motoni was closely tracked after participating in a sensitization program in Bida, Niger State.

Speaking to a correspondent, a friend of Mr. Motoni revealed that he had received an SMS from DHL Nigeria to pick up a parcel at Makarfi Plaza at Central Market, Kaduna State, but unknown to him, he was walking into a trap.

“Moses received an SMS from DHL Nigeria to pick up a parcel at Markafi. He went to pick it but when he got there, he was shocked to be apprehended by some SARS officers who forced him into a car and drove off. That was when he knew that the SARS officers were posing as the staff of DHL,” he narrated.

It was gathered that Mr. Motoni was denied bail and the police barred anyone from seeing him by ordering officers at the security post to either send away or detain anybody who came looking for him.

It was reported that Senator Sani had invited Mr. Motoni to his house for a meeting after the sensitization at Bida, but Mr. Motoni declined the invitation and headed to Kaduna State where he was eventually arrested.

Mr. Motoni was initially detained at Metro Police Station, Enugu Road, Kaduna, but he is being transported to the SARS headquarters in Abuja where he will remain in detention. 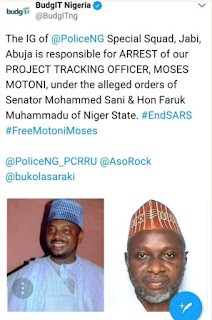 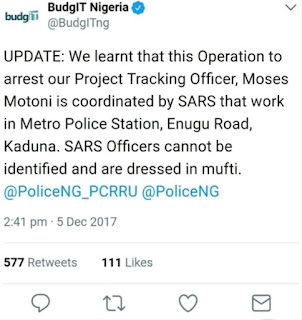 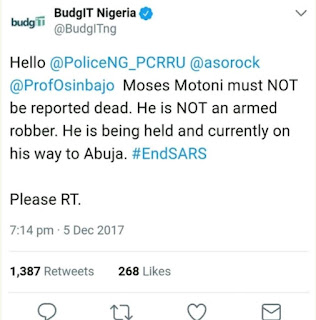 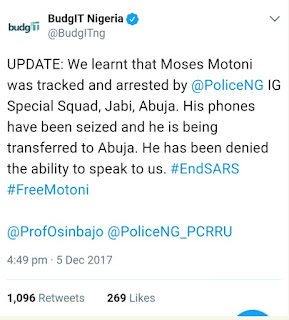