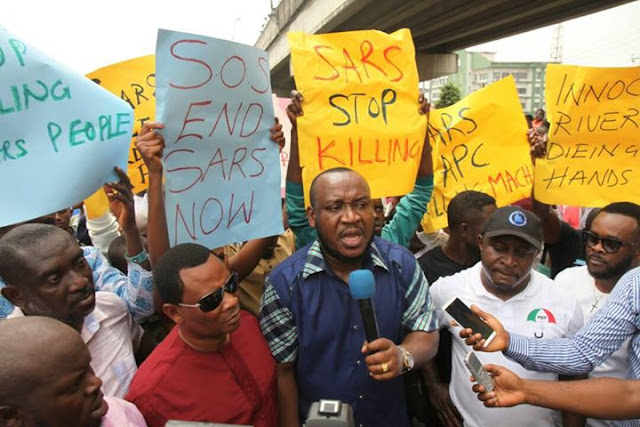 Thousands of Rivers people under the platform of the Grassroots Development Initiative on Monday took to the streets to protest  the killings, kidnappings and electoral fraud perpetrated by the Special Anti-Robbery Squad (SARS) in the state.

The protesters marched through the streets of Port Harcourt before terminating at the PDP headquarters where statements were made by leaders.

The protesters sang anti-SARS Songs and displayed placards condemning SARs Personnel for their devilish acts of lawlessness. They also demanded the immediate sack and prosecution of the Rivers SARs commander, Akin Fakorede.

President-General of Grassroots Development Initiative, GDI, Mr Bright Amaehwule berated the Special Anti-Robbery Squad for turning themselves into political criminals used by the All Progressive Congress (APC) to perpetrate crime against Nigerians.

He said that the pro-SARs rally in Port Harcourt by the APC  on Monday confirmed that the brutality of SARs in the state is being sponsored by the APC.

Amaehwule called for the immediate sack and prosecution of the Rivers SARs commander, Akin Fakorede who was captured on tape committing electoral fraud. He said Akin Fakorede and his operatives must be held to account for their crimes against Rivers people.

He particularly lamented the three Ogoni youths killed by SARs operatives because they stopped SARs from engaging in pipeline vandalism.

In his remarks, the Publicity Secretary of Rivers PDP, Mr Samuel Nwanosike regretted that the Police High Command allowed SARs  to degenerate  into a deadly criminal gang.

He pointed out that SARs has become a security agency used by the Minister of Transportation, Mr Rotimi Amaechi to terrorise Rivers people and steal their mandate.

While re-affirming the call for the sack and  prosecution  of Akin Fakorede, Rivers SARs Commander, Nwanosike  said Rivers people will never be intimidated by the criminally minded security gang.

He said: "SARs as presently constituted is no longer a security outfit. It has been turned against the people, hence Nigerians from all walks of life  want the outfit disbanded.

"In Rivers State, we demand the sack and prosecution of the Rivers SARs commander, Akin Fakorede.  He has committed  crimes against our people.  We will continue  to resist  the impunity of SARs.  Rivers people will never intimidated by a gang of criminals ".

Former Chairman of Obio/Akpor Local Government Area, Mr Collins Onunwo said the people will not allow the use of SARs for the rigging of the 2019 General Election.

It will be recalled that Rivers State Governor, Nyesom Ezenwo Wike drew the attention of Nigerians  to the crimes being perpetrated by the Special Anti-Robbery Squad.

The governor had in press conference brought to public notice the Signal Sent by the Inspector General of Police X Squad wherein SARs in Rivers State was indicted for kidnapping one Ifeanyi and demanding ransom from him. The signal revealed  that the SARs operatives later engaged the IGP X Squad in gun duel, leading  to the death of a SARs operative.

Governor Wike requested the immediate transfer and prosecution of the Rivers SARs commander. He also called for independent investigation of the activities of SARS in Rivers State.  The IGP declined both requests. 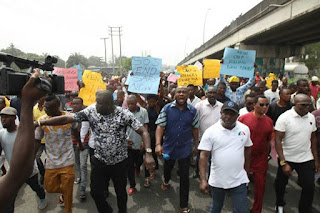 In response to the Inspector General of Police claim that he will reform SARs, Governor Wike advised Nigerians not to be deceived because the Police High Command has concluded plans to turn SARs into a deadly  election rigging outfit in 2019.

Only recently, SARs operatives in company of the Minister of Transportation, Mr Rotimi Amaehwule breached the security of Governor Nyesom Ezenwo Wike.  The SARs commander led the team.