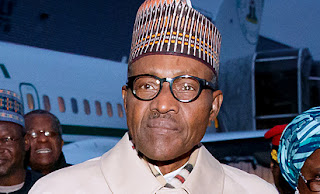 AS President Muhammadu Buhari clocked 75 years yesterday, he has expressed happiness that his health condition has improve greatly and thanked Nigerians for their fervent prayers. Though President Buhari did not organize any birthday celebration, his aides presented him with a birthday card at his residence in the Presidential Villa. President Buhari arrives Paris Ahead of the One Planet Summit in France The Chief of Staff, Abba Kyari, and the Permanent Secretary, State House, Jalal Arabia, led the presidential aides to present a giant birthday card to him. The card designed in green and white colour, had the President’s photograph with the inscription boldly written, “Happy Birthday, Mr. President,” embossed on its cover. After Kyari presented the card that had earlier been signed by all of them, the President took group photographs with them while they sang birthday songs. Those who joined Kyari included Permanent Secretary, State House, Jalal Arabi; State Chief of Protocol, Abdullahi Kazaure; Special Adviser on Media and Publicity, Femi Adesina; Senior Special Assistant on Media and Publicity, Garba Shehu; Special Assistant on Domestic Affairs, Abba Sarki; Personal Assistant to the President, Tunde Sabiu; President’s Personal Photographer, Bayo Omoboriowo and the President’s security aides. Also present to wish President Buhari happy birthday were service chiefs, led by Chief of Defence Staff, General Abayomi Gabriel Olonisakin. Chief of Army Staff, Tukur Buratai; Chief of Naval Staff, I.E. Ibas and the Chief of Air Staff, Sadique Abubakar, accompanied the CDS. The President while expressing appreciation for the visit and birthday wish by his aides, thanked Nigerians for their concern and fervent prayers and also expressed joy for the improvement in his health condition. Recll that President Buhari returned to the country on  August 19 after spending over 100 days in London on medical vacation. He had also returned to London after attending the 72nd Session of the United Nations General Assembly (UNGA 72), in September. The Ogun State Governor, Ibikunle Amosun, who is a close ally of the President, presented him with a green-white-green giant card. The card has an inscription boldly written, “A leader for all seasons @75. President Muhammadu Buhari GCFR” with the President’s portrait.