"President Buhari And I are Poorly Paid" - VP Osinbajo 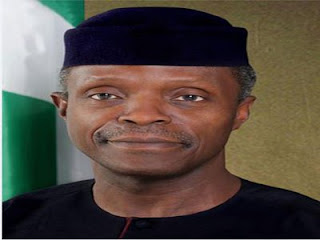 He criticised the private sector for not respecting the national minimum wage law, which puts the lowest pay at N18,000.

Speaking at the end-of-year seminar of the State House Press Corps at the old Banquet Hall of the Presidential Villa in Abuja, Prof. Osinbajo said he earns about N1.5m as Vice-President; President Buhari earns about N1.75 million.

To him, the pay is not commensurate with the offices they occupy.

The vice president also expressed misgivings about the remuneration of journalists and lawyers, saying journalists’ case is unique because many media owners make big revenue but simply refuse to pay good wages.

He recalled his brief encounters working with media houses as legal adviser and how in all the months he worked he was not paid despite the irregular hours he put in.

Osinbajo spoke of entry into journalism as not rigorously regulated or enforced by professional bodies because untrained persons are allowed in.

He added: ”I realised first of all that this (journalism) is not a profession from which one could make a decent living in the first place unless you find a really good way of doing so.

”But more importantly for me is that you are just on your own. Journalism as a profession is so wide open.

”There are a few reasons in my view why remuneration is poor.

”The first is that it is just simply cheating. There are owners of media that are just cheats. They just want to get something from nothing and that is not uncommon, it is a general malaise, it is not necessarily restricted to the media.

”It is also the same in the legal profession. There many lawyers if they tell you what they earn, you will certainly not want to be a lawyer.

The Vice-President urged journalists to brighten their prospects and future by always seeking ways of improving themselves and getting better job opportunities with attendant improved income.

Nasarawa State Governor Tanko Al-Makura, represented by the Commissioner for Information, Mohammed Kwara, was the chairman of the ceremony.

He said: “It is important to note that a good retirement plan starts the very day you are employed, knowing that whatever has a beginning has an end; 35 or 60 mandatory years of service are certainly not eternity.

”It must also be stressed here that it is not too late to plan even where you have just few years to retire from service.

”The most important thing is that you have a plan either of money saved or of the job you intend to carry on after retirement. Put every other factor in place such as your age, strength and the mental capacity to carry on.” he advised.

He added “It is important to state, therefore, that the uncertainty on payment of entitlements has continued to worry Nigerian workers, making them fear retirement.

”This has led to prospective retirees falsifying their age just to enable them stay put in the service.

”In this regard, a lot of corruption induced activities have continued to infiltrate the MDAs and the organised private sector responsible for managing pension,” he said.

Kwara listed 10 ways to prepare for retirement, including saving, knowing your retirement needs and contributing to an employer’s retirement savings plan.

Others, according to him, are learning about employer’s pension plan, considering basic investment principles, not touching your retirement savings, asking employer to start a plan, think of creative ways to be self sustaining, find out about one’s social security benefits, and asking questions.

The guest lecturer and Chairman of Elumelu Foundation, Tony Elumelu, said retirement should not be synonymous with being tired or giving up as it should be a stepping stone.

He advised working journalists to pursue their purposes with passion, stressing the need to increase capacity in readiness for the next phase.

He said: “Entrepreneurship is not a function of age. Set your milestones and work towards accomplishing the milestone.

”Entrepreneurs are resilient; they persevere to succeed. You don’t need to give up easily, it requires sacrifice, discipline.”