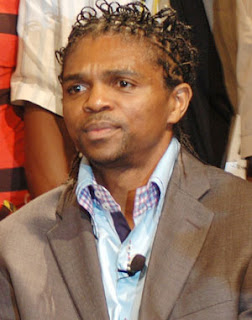 It’s worrisome that police athletes have not performed well again after Ajunwa, Kanu By Joseph Erunke ABUJA-MOVED at the deteriorating records of sports in the Nigerian Police Force since Atlanta Olympic `96, where its representatives, especially in the female category were the cynosure of all eyes following their scintillating performances, the authorities have initiated plans aimed at immediately reviving it. Nwankwo Kanu Under the plans initiated by the Inspector General of Police, IGP Ibrahim Idris, legendary football star,and football gold medalist at the Atlanta 96 World Cup, Kanu Nwankwo, is to be the handler. The expected formal engagement of the football star,which kickoff time was still shrouded in secrecy, started with a visited by Kanu to the police chief yesterday, at the Force Headquarters, Abuja, where issues surrounding the deal were discussed. Although Idris could not open say this when Kanu visited him on a scheduled arrangement, it was gathered that the drive to revive sports in the service which had since nosedive since 2006 necessitated the partnership. But speaking when the Nigeria football legend visited him, Idris described Kanu as one of the best the country had ever produced in the field of football, saying the police under his leadership will always identify with people who wanted to promote sports. He said:”In the field of sports, the Police, under my leadership,will continue to promote sports as a veritable tool for physical fitness of personnel and national development, unity and cohesion. “We sponsored the IGP Queens who came third in the Zenith Women’s basketball league and the Police Baton in the men’s basketball league as well as the Police Flickers who came second in the national hockey league. The team will now represent the country at the Nations Cup in Egypt. “Nigeria has always relied on the Nigerian police to produce athletes for international competitions. The Police are, therefore, committed to making the country proud in sports and security. “Sport is very important to all aspects of physical development. We recruit personnel annually and we will allocate a percentage to sports.” While speaking on security, IGP Idris said: “It is on record that we have within our short but purposeful stay in office marshalled out strategies to check a lot of security challenges that have continued to threaten us ad a nation. “I would want to assure your humble self and indeed, all Nigerians, that with supports and encouragement like yours today, we have been able to reduce to the barest minimum, cases of high ciass Kidnap Kingpins and check their activities. You would recall cases at individuals and groups like the Vampire, Evans and over 3000 kidnappers terrorising people along Kaduna-Abuia High way and in other parts of our dear country. “In the like manner, we are sincerely addressing cases at armed robbers, farmers/herdsmen clashes, cattle rustiing and a host of other criminal activities and gangs in Nigeria. On the reason for his visit, Kanu said he came to offer support to the Police Force and also seek ways of partnering with the Force to produce athletes like Chioma Ajunwa and Samuel Peter. He regretted that morale for sports in the police had seriously gone down unlike what used to be in the days of Olympic gold medalist, Chioma Ajunwa, saying there was the need to revive the spirit. He said he has been following the activities of IGP Ibrahim Idris since he assumed office and was extremely impressed by the proactive and visibility policy of the police.