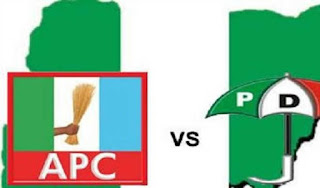 Members of the Peoples Democratic Party (PDP) on Thursday openly jubilated as one of them defected to the ruling All Progressives Congress (APC).

The PDP lawmakers described Rep Johnson Agbonnayinma as "an outcast" whose defection to the APC is a welcome development.

Agonnayinma in a letter read on the floor by the Speaker Yakubu Dogara said the PDP has shut the door against some of them that belonged to the Ali Modu Sheriff's faction of the party.

He said as far as they were concerned, the party remained factionalized even after the December 9 National Convention as a "concocted Unity List" was used in conducting elections.

However, instead of the PDP lawmakers to raise a point of order demanding that Dogara should declare the lawmaker's seat vacant as they did in the past, they became jubilant and bid him farewell.
Posted by Unknown
Labels: Politics