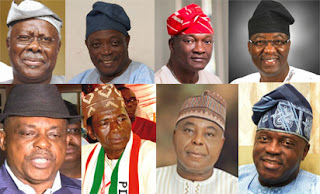 With less than 24 hours to the elective convention of the Peoples Democratic Party (PDP), the South-East Stakeholders Caucus of the party has endorsed Prince Uche Secondus for the position of national chairman.

In a communiqué delivered by Austin Umahi, PDP National Vice Chairman (South- East) at a media conference held at the Chelsea Hotel in Abuja on Friday, the caucus mandated its delegates to the convention to vote for Secondus , saying the decision was taken after a careful consideration of his “Content and character.”

The communique read: “In our meeting today, December 8, 2017, we the stakeholders of PDP South-East geo-political zone having examined all the people vying for the national chairmanship position of our party, PDP; we wish to commend highly all the aspirants especially on how they have conducted themselves during their campaigns fully aware that this is an internal party affair.

“We are very conscious of the personality of who becomes the national chairman of our great party for the next four years. Based on the fore going, we have unanimously in our today’s stakeholders’ meeting, decided that we will back an aspirant that has character and content.

“In this circumstance, and without prejudice to the right of other aspirants to this national chairmanship position, credible and transparent election, we have decided to back and vote for Prince Uche Secondus for the position of national chairman of our great party.”

Others included former PDP national chairman, Vincent Ogbulafor, a one-time Deputy Speaker of the House of Representatives, Emeka Ihedioha and the PDP governorship candidate in the November 18 Anambra guber poll, Oseloka Obaze among others.
Posted by Unknown
Labels: Politics