A+ A-
Print Email
OWERRI—Uneasy calm has enveloped Owerri, following the renaming of Assumpta Avenue by Governor Rochas Okorocha, to Muhammadu Buhari Road. Chief Rochas Okorocha The Road which was named after the magnificent Maria Assumpta Catholic Cathedral, Owerri, several decades ago, had remained so until it was renamed by Okorocha. It is recalled that Assumpta Avenue, with the Zip Code 460211, stretched from the old Library Roundabout, Okigwe/Wetheral Roads, to Assumpta Cathedral, Control Post. It would be recalled also that following the establishment of banks along the Assumpta Avenue, some residents, including commercial motorcyclists, started calling part of the Avenue, Bank Road. A staff of one of the banks, who spoke 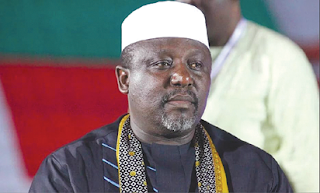 on strict grounds of anonymity, said that most of the banks bear Assumpta Avenue as their official address. He stressed that “it is this Avenue that Governor Rochas Okorocha has sadly changed to Muhammadu Buhari Road”. Another resident of Owerri, Bro Ikay, equally lamented that Okorocha has changed the names of other major roads in Owerri. “Wetheral Road is now Sam Mbakwe Road, while Okigwe Road has been renamed Nnamdi Azikiwe Road”, Bro Ikay said. Continuing, Bro Ikay recalled that Okorocha had earlier renamed Douglas Road after the 10-year old boy, Somtochukwu Ibeanusi, who was shot dead, during the destruction of Ekeukwu Owerri market.