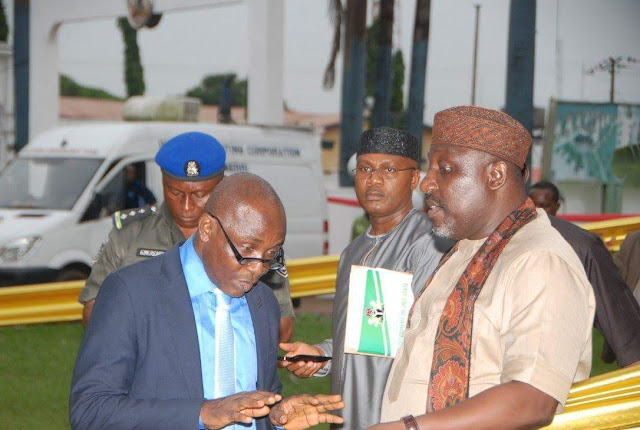 .We Can’t Be Cowed by Threat, Intimidation-Mgt

Following the sudden presence of unknown persons at the private homes of publishers of Trumpeta newspapers, and strange movements noticed  at the corporate office of the media organization, at the Ikenegbu area of Owerri, Imo State, the management and staff of the regional based tabloid with Owerri office has raised the alarm of threat to their life.
The public notification of the threat to the life of the Trumpeta publishers is coming at the heels of a story carried by the newspaper which has made the state governor, Owelle Rochas Okorocha, to not only ask his lawyer to write the medium, but also dragged the newspaper directors; Messrs Gerry Ogu, Henry Ekpe and Kelechi Mejuobi, to the State Security Services, (DSS), for interrogation.
It would be recalled thatTrumpeta in its Thursday, December 14th edition, as part of the cover stories published the encounter between the governor of Imo State, Owelle Rochas Okorocha and the traders at the new market.
Since the story captioned “Okorocha Escapes Mob Attack from Traders hit the newstands”, unusual developments related to their security have been noticed.
On the fateful day the report came out,  some funny calls from unknown persons were put across to the publishers, while the two tyres of the car of one of the Co-Directors who is also an editorial staff of the newspaper, got flattened where it was parked on the streets in the state capital. As at yesterday while in office for duties, one of the Directors of the newspaper got another strange call from a cloned line even as the state government under Governor Rochas Okorocha went further to raise certain claims against the management before the DSS.
While the editorial crew was on with production for the next day edition, unusual movements by some faceless persons were noticed around the office. Also, unusual movements too were recorded at their private homes. In one of the cases, one of the publishers who was on his way home at about 8.30 pm three days ago, noticed the presence of two young men stationed near the gate of his home. One of the two persons was making a call before the publisher made a quick detour to avoid his house and could not enter through the gate.
The management of the establishment wishes to state that a particular suspicious number sent a “nasty” text message to one of the publishers immediately they left SSS office, Owerri. One also called to demand his whereabout under the pretext of “bringing an advert to be published. Despite the publisher’s insistence that the medium does not operate on weekends, the caller demanded to know his whereabout for one-to-one meeting.
These sinister moves by unknown persons are coming against the backdrop of a “harsh” reaction suspected to have come from the Chief Press Secretary to the Governor, Sam Onwuemeodo, concerning the report carried by Trumpeta. In what appeared to be a coincidence of attacks targeted at Trumpeta, Onwuemeodo sent a “nasty” text message to one of the publishers using an unofficial phone number. Onwuedeodo’s message occurred at the same time the publishers were experiencing the unusual developments.
It would be recalled that Onwuemedo who functions as Okorocha’s media aide had in one of his write-ups in Whitepaper, another local tabloid he has vested interest in, while responding to a commentary written by one of the Trumpeta publishers, reminded the public of ills visited to Journalists in the course of discharging their duties.
Onwuemeodo while relaying the sad reminders of the military era, when freedom of the press, was denied, reminded the public how a journalist hair was brazenly shaved by a Military Administrator of old Rivers State who is now a    first class monarch in Bayelsa State, disappearance of a top flight reporter of a national daily in Lagos and the unfortunate bomb blast that killed Dele Giwa of the Newswash magazine fame. The litany of misadventure, oppressive forces visited on journalists, according to Onwuemeodo, includes the phantom charges slammed at Hot FM owner,  Senator Christy Anyanwu by the military junta forcing the military tribunal to send her to jail.
Trumpeta expresses reservations about the correlation between the present security threats to their life  and earlier warnings of Okorocha’s media aide, Onwuemedo.
The medium uses this opportunity to alert the general public the direction to look at should anything uncomfortable happens to the Management and Staff of the newspaper because of Onwuemedo earlier rehearsal of anti press modules.
Apart from asking his lawyers to writeTrumpeta newspapers demanding for a retraction of the story, Okorocha went further to ask the Directorate of State Service (DSS) to querry the publishers thereby promoting an invitation from the secret police on Friday 15thDecember, 2017.
Barely two hours after that particular edition hit the newsstands, the publishers; Gerry, Henry and Kelechi received different text messages for an invitation to DSS state office on Onitsha Road, Owerri. Two of the publishers met with SSS operatives who allowed them to go after interrogation and necessary statements.
However, the medium wishes to state that no amount of threat or intimidation from any quarter, especially, the one coming from Government House, Owerri, will induce the newspaper to jettison its role as the watchdog of the society.
As the Fourth Estate of the Realm, the newspaper has an obligation to serve the public with accurate information not minding whose ox is gored. Okorocha and his government is expected to know that the essential tenets of democracy allow for freedom of the press. And since he is a product of the system, he should allow the press be for the good of democracy.