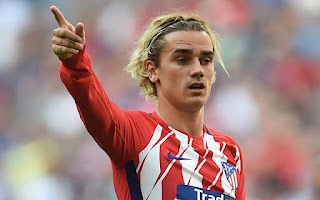 Manchester United are reportedly now ahead of Real Madrid and Barcelona in the queue to seal the transfer of Antoine Griezmann as Atletico Madrid look to sell him abroad.

According to the Daily Mirror , the Spanish giants are unhappy with how Barca have conducted themselves in their approach over the move, leading them to report their rivals to FIFA.

This follows similar claims from Don Balon that Griezmann feared his move to the Nou Camp could be in doubt, and the Mirror suggest that is now a firm decision in Atletico Madrid’s mind.

They claim the club would now be particularly keen to push for their French forward to move abroad, with United seemingly his biggest admirers in the Premier League.

Griezmann, 26, has been one of Europe’s top attacking players over the last few years and could fit in perfectly at Old Trafford.

Romelu Lukaku has faded after a fine start to the season and doubts remain over his temperament in the big games.

Griezmann could be an upgrade up front and would also provide options in a variety of attacking midfield positions, making him arguably a bargain at his reported £88million buy-out clause in this current market.
Posted by Unknown
Labels: Sports