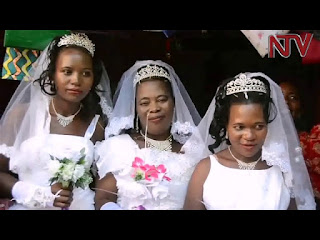 This is polygamy taken to a different level. A 50-year-old Ugandan man, Mohammad Ssemanda has surprised locals by marrying three women at ago. Mohammad is a food vendor at Kasenyi landing site, in Wakiso district.

In a little twist, two of the women are sisters. The brides include a 48-year-old Salmat Naluwugge, with whom the man already has five kids with, plus Jameo Nakayiza, a 27-year- old and Mastulah Namwanje aged 24 who are sisters.

Ssemanda explained that his wives were all okay with his poor financial status. Being a Muslim, he is allowed to marry up to four wives and it’s no big deal. He said;

“My wives are not jealous against each other. Good enough, each has got a home and I promise to work harder and support them.”

One of the wives, Salmat Naluwugge, also spoke, saying;

“I thank our husband for marrying us all at once, a sign that he will not discriminate or sideline any of us.”
Posted by Unknown
Labels: Gist