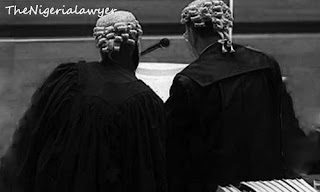 Mr. Komolafe, the Magistrate of Court 11 Magistrate Court, Ogba, Lagos had earlier today been reported to have denied a female Muslim counsel audience in court for appearing before the court with her hijab covering her head; she had tucked in her hijab in her colarette.

According to an eye witness’ account who had a matter in court 20, there were only five matters on the cause list, so he had to move to court 11 where he witnessed the scenario.

According to him, the lady was to appear with a senior lawyer, who then had to withdraw her appearance because the Magistrate will not let their matter go on.

However when TheNigerialawyer spoke with an eye witness the information gathered reveals some details somehow different from the first.

TheNigerialawyer first spoke with an eye witness in the courtroom when the incident happened and he said the sister was supposed to be led by a senior. When the senior announced his appearance and wanted to announce the appearance of the sister, the Magistrate cautioned him and said that Hijab is not allowed in her courtroom. When TheNigerialawyer contacted the senior, he said that the sister was not particularly well dressed.

He said it is not a strictly Hijab issue.

TheNigerialawyer tried to interrogate him and he said the sister would be in a better position to explain what happened. The senior is also a Muslim brother.”

Speaking further, he noted that he called the sister’s number and it was presently not available.

The alleged action by the learned magistrate has resulted to reactions from lawyers in the Legal community. According to an Anonymous commenter, counsel, whether male or female are not expected to appear before the magistrate covered. In his words, such rule only applies to counsel appearing before a judge in the High Court and other Superior courts of record.

TheNigerialawyer recalls that there is currently an issue heating the legal community about a female law school student by name Amasa Firdaus who was not allowed entrance into the International Conference Centre for failing to expose her ear lobes because he had covered same with a Hijab, a material worn by females of the Islamic faith.
Posted by Unknown
Labels: Career