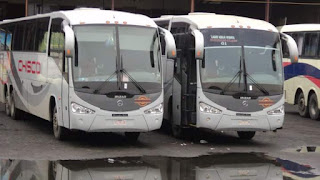 The Lagos State government yesterday commenced enforcement of the relocation of inter-state buses from Jibowu to Ojota by shutting down premises of some major commercial transport companies, at Jibowu, on Ikorodu Road in the state.

New Telegraph gathered that the Permanent Secretary, Ministry of Transportation, Olufemi Salami, ordered the shut down with the approval of the Acting Commissioner for Transportation, Anofiu Elegushi.

Among the companies sealed were Chisco Transport, Ifex Express Limited, and GUO Transport. Other companies like God Is Good (GIG) and Peace Mass Transport, were ordered to immediately stop operation of cargo services around Jibowu.

Elegushi said that the enforcement was a follow-up to a directive earlier this year, by Governor Akinwunmi Ambode, to all transporters operating around the Jibowu and the stretch of Ikorodu Road, to relocate their operations to Ojota, where the government had provided a land to accommodate them, now known as ‘Ojota Luxury Bus Station’.

The Acting Commissioner said that the Ojota luxury bus station was being made ready by a concessionaire with whom government had entered into an agreement to build it, with modern facilities, provided, adding that all the transporters were required to do was to comply with the government’s directive to relocate to the new station .
Posted by Unknown
Labels: Transportation