Lady Dies After Beating From Her Policeman Husband In Makurdi, Benue (Photos) 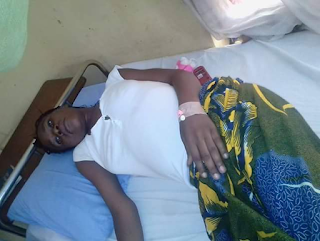 Facebook user Boldness Deterhama has shared heartbreaking story of how his sister died after suffering from non-stop beating and domestic violence in the hands of her husband, According to him she lost 2 babies, one to miscarriage, the other hours after birth, due to the beating, Boldness is now calling for justice on his sister, read the sad story below!

''we, the members of her family, did everything possible to make her discontinue with the marriage where she was always receiving beatings as her food but all our efforts proved abortive and we have to let her be to avoid being accused of sabotaging her marriage.

Nevertheless, the brutality that led to the current incident occurred on November 8, 2017. According to what she told me concerning the incident before she died, she went and brought food from her parents’ house, and when the food got finished, her husband refused to buy more food for them in the house. According to her, she was worried about her kids after being slept with hunger for good four days. Thereafter, on November 8, 2017, the husband wanted to go to work and she told him about the food issue in the house but he ignored her as usual. After that she asked the husband to explain why he don’t like providing food for them in the house but always eat together with them the one she brings from her parents’ house? Thereafter, the husband got angry and replied her with punches. She was beating mercilessly by him to a point that she became weak and unfit to walk. Quickly, she was rushed to the Police Clinic at Police Head Quarters in Makurdi. She explained all this in the presence of her husband when her mother, Mercy Awuna, visited her at the Police Clinic in Makurdi. It will shock you to know that at the Police Clinic, the husband was not even having money to pay for her treatment. If not for the efforts made by her parents, she wouldn’t have even gotten the first aid treatment at the Police Clinic.

At the Police Clinic, the situation became more complicated and she was moved to the Federal Medical Centre within the same Makurdi Metropolis. From the Federal Medical Centre Makurdi, the husband came and took her out in the absent of her mother, who went back home to prepare food for her. Where was she taking to? To a native doctor for treatment.

Notwithstanding, at the native doctor’s place, the doctor detected and confirmed some dislocations in her body within the areas where she was given several punches by her husband but the conditions given before the treatment were not met and the husband abandoned her there for a week before he finally moved her to Benue State University Teaching Hospital Makurdi because of the pressure mounted on him by the family of the late Torkwase.

Similarly, sometime in 2015, a woman, Torkwase’s husband was having extra marital affairs with, came looking for him at his rented apartment where he was staying with Torkwase. According to the information I have gathered with proofs, the husband’s lover wanted to force herself into their room after telling her that her husband was not around and that was when a fight broke out between the two of them. Torkwase was able to overcome her husband’s lover thereby giving her a beating of her life. The husband’s lover finally went to B Division Police Station in Makurdi and reported her. The police came and arrested the late Torkwase alongside her five months old baby. Thereafter, I went to the police station to bail her from the police but police refused to grant her bail.

The whole thing was happening in the presence of the husband who was only watching without doing anything. She was finally dumped into the police cell where she spent a night with her five months’ old baby. I did a story on that very incident and it was published in Sunday Sun Newspaper.

The publication of that story caught the attention of some high ranking officers in the police force before her release was made possible.

I remembered telling her to report her husband to the bosses at his office for always abusing her and she did but disciplinary action has never been taken against him. Two weeks before her death, her father Mr. Daniel Awuna, went to the Police Head Quarters in Makurdi to report her husband officially, but he was mocked by the officers he met thereby deceiving him that the people he supposed to report to them were not around but forgetting that the same people my father wanted to see were seen within the vicinity at the time my father was asking after them. To make a long story short, something should be done now or else, retaliation is the available option. 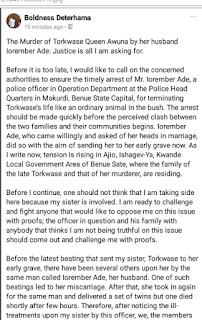