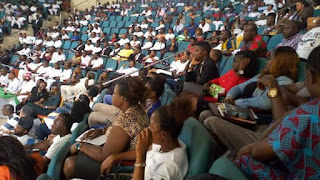 I don't really care about what they call us these days because some of us have given up the need to be liked, and as such; try not to be politically correct, but 'peoples' correct by speaking the mind of the silent majority.

I was shocked yesterday when i realised that some youths actually sat down to listen to the maverick governor of all times, in what was described as the first ever Imo youths conference. Pardon my indiscretion, but with the latest intrigues and unending drama that have enveloped our dear state for some time now, I am forced to believe that those were not actually Imo youths, but another hired crowd since we all cannot be cowed.

Seriously! As youths, we need to choose our friends carefully and our enemies, even more carefully because when you sit at events like this, at a time when government and governance has been brought to great height of public nuisance and ridicule; you may as well check yourself for a single shred of dignity. What a time to be called an Imolite, talk less of been called an Imo youth.

I still stand on the words of late literary icon; Chinua Achebe who said, "there may be times when we are so weak to fight, but there should never be a time when we fail to protest." This is one of those times. A popular African adage says, that you cannot beat a child and expect that child not to cry. The Imo state government has insulted our collective psyche, not only as youths, but also, as a people. We cannot forget in a hurry, the many anti people policies and programs of this government, yet they expect us to join in their usual "teeth sampling" cum show of shame. I make bold to say that some of us have not been morally bankrupted, not yet!

For those of us that are emerging future leaders, the only two rules you'd need to keep to survive in your life are; believe in yourself and work hard towards your goals as there is no shortcut to success. In becoming a leader in your chosen area of contribution or career choice, please make sure it's something you love to do, have passion for, effective at, can relate to your natural learning style, and can connect to wealth creation for yourself and others. Excellence is not a destination, it is a continuous journey that never ends. According to Bill Taylor, “The true mark of a leader is the willingness to stick with a bold course of action - an unconventional business strategy, a unique product development road map, a controversial marketing campaign even as the rest of the world wonders why you're not marching in step with the status quo."

Moving forward, let it be known that I am not in any way calling for a boycott this time, but want this to be my own way of letting those involved know that some of us are angry as to how our parents and people are been treated by the government of the day. More so, that we all have not grown so weak as not to speak or act, as we would speak with one voice; loud and clear, when the time is right. For now, they can enjoy this charade called good governance that is going in our dear state.
Posted by Unknown
Labels: Opinion