Menu
Home » Opinion » ﻿﻿﻿﻿IMO 2019, THE CANDIDATE AND THE PARTY; FROM THE PERSPECTIVE OF AN ONLOOKER (Pt 1) By Fortune Akujuobi

﻿﻿﻿﻿IMO 2019, THE CANDIDATE AND THE PARTY; FROM THE PERSPECTIVE OF AN ONLOOKER (Pt 1) By Fortune Akujuobi 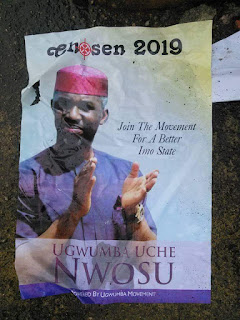 IMO 2019, THE CANDIDATE AND THE PARTY; FROM THE PERSPECTIVE OF AN ONLOOKER (Pt 1)

Some time last month, around mid November, I was in the beautiful city of Port Harcourt. During one of my casual evening hangouts with the boss, a man I hold in high esteem, a political analyst and a strategist per excellence, Barr. Christopher Okafor.  We discussed several issues. More particularly, Imo politics and the 2019 election.

Before now, many considered it unthinkable and unimaginable that Uche Nwosu will contest for Imo governor come 2019, some even dismissed it as a mere distraction and one of the normal gimmicks of Gov. Rochas Okorocha.

But today, it is visible to the blind and audible to the deaf, that Ugwumba Uche Nwosu is seriously in for the race.

Apart from the overwhelming popularity he has garnered, disarming the electorates with selective generosity, he has established a working political structures virtually in all LGAs of the state.

As at today, he is the only visible guber aspirant under APC from Orlu Zone, and may retain the status quo till 2019. Its also of significant interest, to notice that Orlu vote comes in bulk, and Orlu has the highest LGAs in the state. To a larger extent, Orlu zone is to Imo people, what the North is to Nigerians, politically.

I don't even want to talk about his endorsement by members of the IMHA, where APC has the highest number of the lawmakers.

Talk of resources, he has enough in stock to slog it out with any candidate from PDP or APC, he also boasts of overwhelming state apparatus and the power of incumbency at his beck and call. It is not just Rocha's fight, but the federal government wouldn't for any reason gamble with the only state to its credit in the entire South East. The Imo East Senetorial re-run, which was delivered in favour of Sen. Ben Uwajumogu of APC, against all odds, is a typical case study. It was a battle to ensure that an APC Senator emerged from the Eastern Nigeria, and Lol and behold, it was a reality.

Ugwumba Uche Nwosu most often than not, features in every opposition political narratives. A line or two is usually dedicated to discussions about him. How he must be stopped. Alliances are being conceived with a motive to stop him. This clearly portrays the fact that he is a candidate to beat, as every aspirant is jittering and justling to stop his emergence as the next governor of Imo State.

The Imo guber 2019 is a battle between Uche Nwosu and others. Others we are not even sure of.

Ararume may appear to weaken the Imo APC structures, that is, if he doesn't decamp to seek greener pastures in another party. Alternatively, he may even negotiate for a better deal, recall his deal with Rochas in 2015.

As for the anti-people's policies of his father in-law, money may wash the sins away.

Truth must be told, we are dealing with an evil genius, a master of deception, Rochas Okorocha. He knows how to get what he wants at any price.

The fact is that there is hunger and poverty in the state. The crumbs that fall from Uche Nwosu's table seems to provide temporal satisfaction to many Imo youths, women and students.

The irony here is that, many Imo politicians often prefer to dole out whooping sums of money; 500 million naira to # 1 billion naira and more, to buy favour and endorsements from the likes of Emmanuel Iwuanyanwu and other self acclaimed agada gbachiri uzo of Imo politics, rather than spend a paltry sum of one hundred million in building grassroot structures across communities, empowering people and maintaining a vibrant political structure. This is where Uche Nwosu is outsmarting them.

While majority of the Owerri zone aspirants are busy beating about the bush in the name of "the turn of Owerri zone", some of them till this moment, have not been able to establish viable political structures in the 9 LGAs of their zone, talk more of moving to Okigwe and Orlu zone. Uche Nwosu is bringing the battle down to their own territory, Owerri zone. He is seriously attacking, while they are defending, not knowing that the best form of defence is attack. Employing the tactis of divide and rule to disarm Owerri Zone. They feel its not yet time, not knowing that the battle to Douglass House has already started. 2019 is still far and yet it is by the corner.
Some of them feel that they will become the next governor of Imo State with just 3 months campaign and shabby youth empowerment programmes. It doesn't work that way.

Half of the work is usually done before party primaries.

Certainly, am aware that some of the challenges of the aspirants are want of resources as engaging in a prolonged battle may wear their resources and exhaust their strength. The only way out of this is to employ skillful soldiers and players who will execute greatness with frugalness.

While we focus our attention on Emeka Ihedioha, by next week, permit me to end with this quotation:

" Thus, we have heard of stupid haste in war, cleverness has never been associated with long delays" Sun Tzu

See you next week...
Posted by Unknown
Labels: Opinion