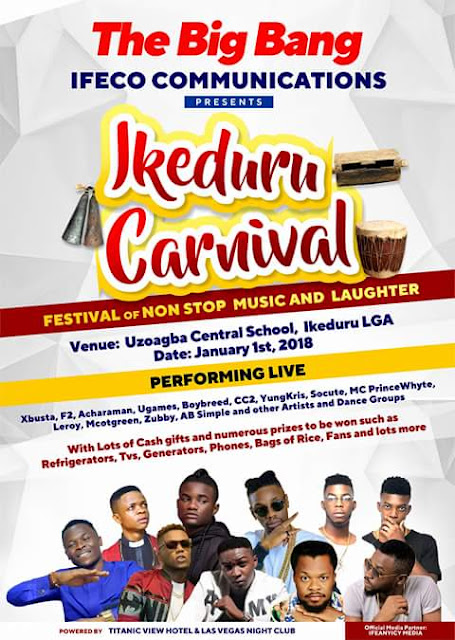 The good people of Ikeduru are set for the big bang, the Ikeduru Carnival, coming up 1st January, 2018 at Uzoagba Central School field, in Ikeduru LGA of Imo State, South East Nigeria.

The sponsor of the programme is Chief Ifeanyi Opara popularly known as IFECO, MD/CEO of TITANIC VIEW and LAS VEGAS NIGHT CLUB.

The occasion promises to be worthwhile as popular Imo artists and comedians are set to make the people happy. 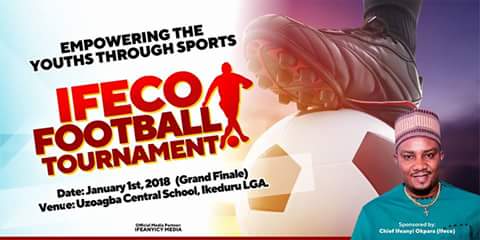 However, in his avowed determination to harness youthful talents and empower them through sports, the Managing Director and Chief Executive of Titanic View Hotel and Las Vegas Night Club, Chief Ifeanyi Opara popularly known as IFECO of the famous Ifeco communication from Uzoagba in Ikeduru local government Area of Imo State, South East Nigeria is calling on friends and lovers of Sports to attend the grand finale of the 2nd edition of the football tournament he is sponsoring for the youths of his local government Area which it's grand finale comes up January 1st at Uzoagba Central School field, Ikeduru LGA of Imo State by 4pm.

The football tournament will be followed by Ikeduru Carnival same 1st at same location till dawn. You are all invited as the best of South East Entertainers will be thrilling the Owerri Christmas and New year audience on specials of dance, comedy and music at Uzoagba Central School Ikeduru.