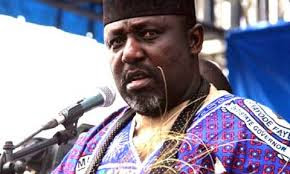 Rochas Okorocha, Imo State Governor, has vowed that achievements of the new Ministry of Happiness and Purpose Fulfilment will shock his critics.

According to Governor Okorocha, the achievements of the ministry will be so amazing, that critics of the initiative will regret to have drawn the curtain for the new ministry even before it takes off. This was even as the governor said former governor of the state, Ikedi Ohakim and the 2015 Peoples Democratic Party (PDP) governorship candidate, Emeka Ihedioha are least qualified to criticise any of his policies or programmes.
His Chief Press Secretary, Sam Onwuemeodo, in a statement, yesterday, said:

“Okorocha is a man of ideas who thinks about the present and the generations yet unborn. He does not misfire on any issue, the attendant criticisms notwithstanding. When the new ministry begins to bear the expected fruits, the accolades will envelop the early criticisms.

“We accept all the criticisms in good faith and commend the critics. That is what makes the society dynamic and our democracy juicy. The truth is that, the new ministry is not an accidental discharge but, a well-thought out idea that will benefit Imo people, in particular, and all men and women of goodwill in general. We only ask the critics to give us time."
Posted by Cheta Igbokwe
Labels: Politcs