Group Wants This Senator Recalled For Kneeling Before Saraki 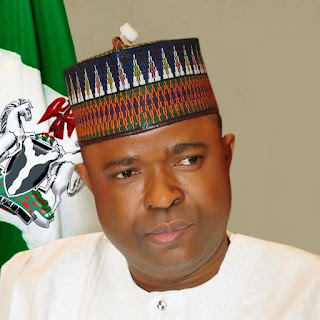 Members of the Kwara South Unity Forum, in Kwara State have commenced the recall process of the senator representing the Kwara South Senatorial District, Rafiu Ibrahim, for kneeling before the Senate President, Dr. Bukola Saraki.

A copy of the petition it sent to the Independent National Electoral Commission, INEC, was made available to journalists in Ilorin, the Kwara State capital, on Sunday.

The President of the group, John Adegboye, while addressing journalists during a media briefing at Ijagbo in the Oyun Local Government Area of Kwara State, alleged poor representation by Ibrahim.

He also accused Ibrahim of “disregarding members and elders of the senatorial district while taking directives from external personalities.”

He said issues critical to the growth and development of Kwara South, were allegedly being openly disregarded and dismissed by the senator.

Adegboroye further alleged that Ibrahim was abusing their democratic rights and intelligence and was not sufficiently addressing human capital development in the area.

He stated, “A situation whereby, a man we voted for, now comes out openly and with audacity, to state that he needs to consult ‘his boss’, who isn’t even from Kwara South, is nothing but a violation of our human and democratic rights.”

According to Adegboroye, it was wrong for Ibrahim to kneel before Saraki.

He said, “We find it demeaning , insulting and outrageous that our senator acted as an escort and body guard to the wife of the Senate President when she was arraigned in court on charges of money laundering by the Economic and Financial Crimes Commission.

“This unnecessary show of subservience has been interpreted to imply a situation in which we are not the people in control of our destinies. We cannot accept this anymore.

“It is therefore under these circumstances that the good people of Kwara South today decide to intimate the generality of Nigerians about our intention to recall Senator Rafiu Ibrahim from the 8 th National Assembly.

“We affirm that the Kwara South Unity Forum has instituted recall proceedings against the senator representing Kwara South Senatorial District. The days of ‘shadow democracy and indirect rule,’ whereby a few individuals become more important than the entire electorate, are over.”
Posted by Unknown
Labels: Politics